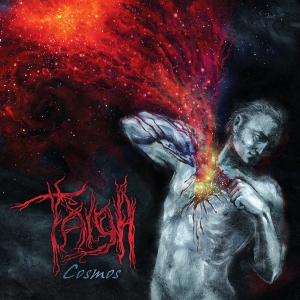 When you’re in the mood for some unhappiness, you must pay attention. As you might know, a taiga is a vast landscape in Arctic and Subarctic regions on our sweet World, with forests and desolate plains, the silence of nature, the absence of joy, the representation of man’s futile existence. As a misanthropic philosopher (or is it a philosophising misanthropist?) such places aren’t but brain candy to me...

Taiga is the moniker of a Russian (Siberian) project too (more specific, from the city of Tomsk, not that far away from Novosibirsk, north of the border with Kazakhstan and Mongolia), which comes with a comparable coldness in its concept. This one-man army is run by Nikolay Seredov (all strings, drums and vocals; also known from e.g. the mighty Epic Funeral Doom solo-project Funeral Tears and Thrash-combo Stakhanovtsy), and once again heavily supported by Aleksey Korolyov, who performs the keyboards (nowadays as an actual member?). The latter is the guy behind Abigorum and Satanath, and the person behind the labels involved with this release + distribution, Symbol Of Domination Productions (+ Satanath Records / GrimmDistribution). Taiga, by the way, did release more material via one of Aleksey’s labels (you will find a review on 2015’s Gaia if you follow this link: http://www.concreteweb.be/reviews/taiga). This time, the release, called Cosmos, gets released in an edition of 500 copies, in partnership with Germany’s Final Gate Records. It comes with a folded six-page booklet, including the lyrics (in their mother tongue) and mystic / cosmic (cover) artwork (by Vladimir Prokofiev of Paint-It-Black Design).

Cosmos consists of nine tracks that last in between four and seven minutes (total running time: forty-eight minutes). The opening track Стыд starts quite intimate (nice synth parts), but soon things turn much heavier. In the vein of the past, Taiga paint a landscape broad and desolate, yet enthralling at the same time. The main structures, not only on Стыд, yet on all other tracks too, are based on melodious riffs and a firm rhythm section, with a huge dose of variation in tempo (with a striking increase of fast-driven chapters), melody and composition. The lead guitars are a fundamental element, going for tremolo riffs, leads and solo fantasies. It is fine to notice the progression in comparison to the former albums, for I have the feeling that Nikolay did spent more time in the song writing this time. Rhythm section wise, the strings and drums do carry the lead guitar parts with ease deep into those lonely landscapes. The bass and rhythm guitars are as melodious as the lead riffing (just listen to those fabulous bass lines in Всё Позади, for example, to find out the majesty of the bass-play), and they are not inferior to the totality at all. The same goes for the drum parts, which sound very organic, even within the faster parts. When it comes to the vocals, there is no difference whatsoever to the past: hysterical, high-pitched, poignant and tart, even twitchy sometimes; but hey, that’s what characterises this project, is it not. Nice too are the few (semi) acoustic excerpts. Often, the use of acoustic guitars is just pathetic, but in the case of Taiga it simply fits. This goes as well for the few spoken parts. The keyboards, finally, as last instrument to discuss, are terrible, just terrible. Eh, I mean, the keyboards permanently create such mysterious, spherical and dreamlike atmosphere, guiding the whole experience into even obscurer and misty landscapes. Here too there is no fake would-be attitude going on; on the contrary, the whole scala of instrumentation sounds so organically correct.

It would be otiose to make a description on each single piece on this album, because all of them are just cool to listen to. Besides, they come with a sound quality that is so appropriate. The production is somewhat raw (especially the guitar sound is just top-notch), yet not inferior or feeble. No, the choice to search for a balance in between a grim approach and a decent result is a strength for sure. Besides, the mix offers all individual instruments their fame. Without turning into an unclear clutter, all details are individually detectable, yet existing in a mostly coherent entirety.

Anyway, to my opinion Cosmos might be the most impressing Taiga-album to date (or maybe second, after Ashen Light; but that isn’t but my personal, subjective opinion), with nothing but highlights. I even do not mind that certain presence of catchiness at all. Hail unhappiness, f*ck joy!