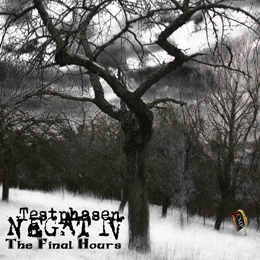 Autumn 2012 was a sad period for Testphasen Negativ and the whole underground community, for Jarosch von der Grünen Alm unfortunately passed away. It was the last recording he did for / with Testphasen Negativ, and the first one to get released after Hostia. The release date was set exactly one year after Jarosch’s decease, and it got done by ContraMusikProduktion, the one and only MedusaDa-label (for more information about this neologism / terminology, I’d like to refer to the review on The Infrared Experience, posted on April 29th) that pays honor and tribute to the toothbrush (get deeper into the subject and find out…) and, especially, open-mindedness. Besides, label-owner Ralli (the guy behind the Ralf Rabendorn solo-outfit) is (the main) part of the line-up, and contributes as producer, master and visual artist too, once again.

The Final Hours can be described as the most emotional album, and that, of course, has to do with the death of… But let’s focus on the positive aspects of this emotional approach, translated through lyrical and aural elements. The album has a total running time of forty seven minutes (eleven tracks that last in between three and six minutes, more or less), and it comes in a decent and laminated 6-panel edition on dvd-format, once again with beautiful artwork (at least as emotional as inspirational again – courtesy of Ralf).

The album opens with That Uncertain Feeling, and damn, it gives me the very same shivering, asphyxiating ‘Ritual Death Ambient’ feeling as Aghast’s Hexerei Im Finsternis! Especially the spooky, haunting synth lines remind me a lot to that (Cult!) album. And throughout this album, the comparison to Aghast reappears several times. But there’s more, for Testphasen Negativ dwells into dimensions of Minimal Noise and Death Industrial as well. At the same time it is tranquil / integer / introspective / sober, as well as expressive / frustrated / persuasive. But this project succeeds to stay deeply organic (in this case totally opposite to synthetic nonsense) and conscious, which for sure is a surplus to get through this personal, confronting experience. Some pieces are rather meditative and hypnotic, then again very creepy and suffocating, in each case with a very horrific and ominous atmosphere. There might be less intensity than on some of the former efforts, but as said before, the atmosphere did change somewhat, caused by unforeseen circumstances (yet following a natural structure of life and death).

Recommended if you can deal with Dark Ambient / Minimal Noise / Esoteric Drone / Death Industrial / Ritual stuff à la Aghast (the higher mentioned Norwegian one), Josef Nadek, TeHÔM, Infinitus Ensemble, The Infrared Experience, Negligee or Northound. Indeed, there is no room for technically-progressive experimental originality or fine-tuned Pop-modernism, but who needs that?...

Toothbrush Music that makes my teeth do something like ‘blink blink’… I’m not sure about my dentist, but I am unhappily happy once again!