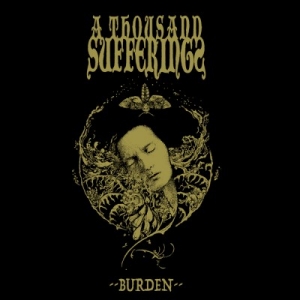 A Thousand Sufferings hail from Sint-Amands, close to Ghent (Belgium), and the band was formed in 2013 by former members of Vex and others. After some first gigs, (Dutch) co-founding member and singer Tijl died in an accident (thirty-six years of age, way too young), so that is why this first official A Thousand Sufferings release is, evidently, dedicated to this guy.

Anyway, drummer Timo, vocalist / guitarist PJ, bass player Nico and (new) guitar player Jurgen did record Burden, their first album, in very early 2014, but it has been released only quite recently via Satanath Records. It’s not the first Belgian band on this Russian label’s roster (or side-label Symbol Of Domination Productions) – cf. Ancient Moon, Angakok, Scum Noise, Zardens and Vox Impia. And FYI, quite some guitar parts have been performed by Noctiz, known from e.g. Paragon Impure and Lugubrum, ex-Gotmoor / Dead Inside / Verloren.

Burden is a four-track album that contains three very lengthy pieces (in between nine and twelve minutes of length) and a shorter introduction, Once In A Blue Moon. This three-minute intro is quite a bizarre thing to experience, for it’s based on a vocal sample (a voice telling about fear) as guidance, accompanied by some sounds like eerie synth lines, bells, sudden drums and haunting noises.

The three other compositions bring a quite unique, own-faced form of Doom. Apart is the voice of PJ, which isn’t a grunt, nor a melodic yelling throat, but something in between. The tortured rawness of his voice, however, corresponds well with the wretched atmosphere of A Thousand Sufferings’ Doom. It’s almost invocative. The songs are very melodious, but structurally based on dissonance and anti-structures. In general, these melodies are quite heavy-paced, which gets strengthened by the powerful rhythm section (low-tuned bass lines, pounding guitar riffs and pushing drums). Actually, there surely is a prominent sludgy attitude riff-wise, yet A Thousand Sufferings do not perform Sludge; let’s be sure about that. Several twin guitar melodies show the craftsmanship of the song writers. The guitar solos are of the purest Doom kind, exhaling both melancholy and inner anger.

Every single track is quite impressive: Red Is Redemption (Bloodletting) for the melancholy and mysticism, Black Is Burden (Lamentation) for its oppressive darkness, and Blue Is… (Remembering Treasures) for the huge variety and great contrasts, as well as the truly grim blackened scream towards the end (a detail, but it arouses me). But above all, there is such a cohesive thing going on, which I cannot ignore. A Thousand Sufferings are not the most renewing band at all, but this isn’t but their debut, and they do distinct themselves from the grey masses with grandeur.

I’d like to recommend you to read the lyrics, for these ones too are not that predictable at all. Okay, it’s not like fabulous poetry, but they are amazingly personal and to-the-point. Belief and deception, religion and disappointment apparently left a mark on PJ’s soul (I think it’s him who wrote the texts).

There are some minor details that need some panache, but I do look out for the next creation. If the trend continues this way, A Thousand Sufferings are about to climb on the throne of the over-crowded Doom scene. I think they can. I hope they will. I’m sure they deserve it.