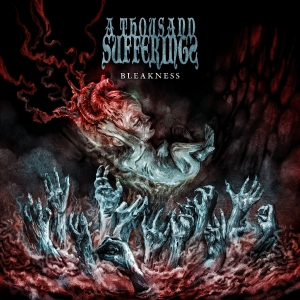 When the band Vex was put on hold, some members continued in a new band, called A Thousand Sufferings. This Flemish horde debuted at the very end of 2015 with the four-tracker Burden, their debut for Satanath Records from Russia. I was honestly impressed by this first effort (see: http://www.concreteweb.be/reviews/thousand-sufferings). For some additional information about the earliest years, I’d like to refer to the review of that album (see link). Anyway, things went silent, yet in Autumn 2017, A Thousand Sufferings did release a very limited split-EP (10”) with their brothers from Marche Funèbre (a review on these last ones’ latest EP, Death Wish Woman, will be uploaded soon).

This review deals with A Thousand Sufferings’ latest effort, Bleakness, which was released in an edition of 500 copies (*) via Symbol Of Domination Productions, a sub-label of Satanath Records, which did release the debut Burden. Bleakness was recorded and mixed at the CR-Studio already a couple of years ago (2016 – 2017), and the result got mastered at the very beginning of Spring 2018. The band resigned their contract with label owner Aleksey, and now we can deeply enjoy this new piece, which lasts for about forty-one minutes.

[(*) regular ‘jewel case’ edition, including eight-page booklet with the lyrics, artwork by Paint-It-Black Design (however, I do not totally comprehend the link in between the ‘emotional’ musical side of the band, and the semi-gore cover painting, to be honest), and layout + design done by Mister Korolyov himself]

Bleakness starts with Bleak, a very ‘bleak’ piece for sure. It is an instrumental one (or better: there are no words and lyrics, yet lots of painful, anguished and wretched screams), with a very, eh, bleak atmosphere. Indeed, this introduction is remarkably trend-setting, mingling elements from melodious DSBM, funereal Doom, sludgy Drone and Atmospheric Ambient Metal with quite some hypnosis and tragedy. With the next piece, Antagonist, the quartet shows its teeth (pieces of lacerated flesh and drops of blood included). Melody is a keyword, for the whole instrumental section focuses on melody. Especially the permanent presence of high-melodic, little tremolo-alike lead riffs defines this approach. Yet the whole rhythm section too supports the melodic approach via superbly supportive rhythms and bass guitars. And when talking about the rhythm section, one cannot ignore the well-presented drum patterns. The latter strengthen the heaviness for sure; not only by being harsh and thunderous, yet in a very intense yet supportive way. And yes, this goes for all compositions on Bleakness. Sometimes you get a fabulous solo (cf. excellent pieces, especially towards the end, like in Temple or Clouds), a sudden outburst (like in Faces or Antagonist) or a total deceleration (like the opening sequences of Temple)

The material is not just ‘heavy’ and ‘pounding’ the whole of the time. Acoustic intermezzi are part of the story too. Let’s get back to Antagonist, for example. This song has such (semi) acoustic interlude, carrying a certain ‘Post’-attitude, bringing forth an atmosphere of profound integrity at the one hand, and mesmerizing escapism at the other. Only the better Post-Hardcore / Sludge / … bands are able to create such organic equilibrium in between the introvert acoustic passages and the intensity of the sludging parts. A Thousand Sufferings succeed to do so…

And then I have not mentioned the varying vocals (by PJ) yet. Here too, the listener might dissect elements from different yet related genres, from Post to Black Metal, from funereal to wretched, from psychotic to evocative. It’s all of them, yet you cannot put the result in one single box for sure, for the totality (song writing + performance, instruments + vocals, and the different negative moods) is quite unique!

Remarkable too, I must say, is the cover version of the cowboy’ish track Ghost Riders In The Sky, originally composed and performed by Stan Jones (about seventy years ago, and still a folkish monument within Mater Terra’s musical history!), and covered a hundred of times before (most known version, probably, is the one by Johnny Cash). It sounds even more haunting than the original version, and it must be the most intense and breath-taking one too. I think it is remarkable how natural it seems for A Thousand Sufferings to have such a classic recomposed enormously, with recreating the whole package, yet still maintaining the atmosphere and emotion of the initial edition. The impact is huge, yet the ‘tribute’-alike elegance is even more huge. Not the best composition of the album, yet absolutely necessary to mention!