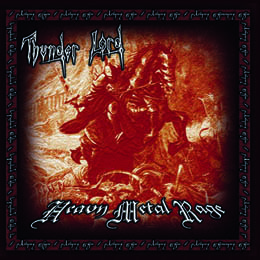 This Heavy/ Thrash Metal act from Santiago, Chile was founded back in 2002 by singer/ guitarist Esteban Peñaililo, second guitarist Misael Cabello, bassist Francisco Menares and a drummer of whose identity I am uncertain (it being either Nicolás Duarte, or a fellow known just as Luis).

With influences coming from the likes of Running Wild, Grave Digger, Exciter, Iron Angel, Sodom, Living Death and Blind Guardian (hum...a lot of German in there, ain't it?), and a gearing toward the Thrash part of that, the band releases its debut 7-track demo Thunder Attack in 2004. That same year the band plays several shows in Santiago and some regions in the south of their country. In 2005 the band not only changes its drummer (Eduardo Núñez, now still in place) but also its style, going for a Speed/ Heavy Metal direction, and releases its second demo, the 10-track Thunder Strike Back in November. With the line-up now consolidated, the band decides to go for a first official full-length. Entitled Hymns Of Wrath In This Metal Age, the album is independently released in Mid-March of 2008 and, containing a mixture of new songs with some older ones thrown in, gets fairly good reviews. The guys also get a chance to do a small tour in South America, and played a couple of festivals, which evidently enlarged their fanbase.

During 2010 and 2011 then, the band takes some time off, preparing also to write new stuff for their next release...when in 2012 Cabello leaves the fold to be replaced by current axeman (and old friend of the and) Diego Muñoz in May of that same year. Apparently little time was wasted getting the latter in gear, as the band already self-released its Heavy Metal Rage album in August! Now released on a worldwide basis thanks to distribution through Germany's Pure Steel Records, the album delivers what the description promises: stuff for fans of Running Wild and Lonewolf...or, in other words, relatively simple-sounding up-tempo Heavy Metal with Thrash flavourings. Simple-sounding on the surface, but the melodies of the riffs underneath are catchy and have a progressive build-up, and are embellished with lead and solo guitar parts. What turns me off, personally, is the somewhat limited range of the hoarse-sounding singer.

For your introduction to the band/ album, you'll either have to make due with the 30-second samples provided by Amazon , or with a couple of videos posted at YouTube. However, those videos are live footage, and only “Dark Rider” is off the current album. The band also has a page at MySpace, but I was quite unable to check that out with the network PC I always do my research on. Maybe there's more over there, eh? As to my personal appreciation of the album, I must admit that 25 to 30 years ago it would've tickled my fancy a bit more than today, as the amount of music made available has increased so much over the years...and I've grown accustomed to higher standards. Still, sóme younger Metal fans might quite appreciate this band's straight-forward style, eh? Find out for yourselves!