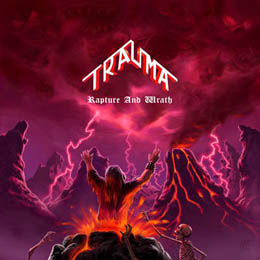 Is it the voice of Iron Maiden, NO, it isn’t, the only member of the original TRAUMA lineup to appear here is vocalist Donny Hillier. Hillier’s vocal sound much more refined and powerful, but they also sound incredibly like those of Bruce Dickenson. Trauma is a power speed metal band from San Francisco formed in 1981 being well known being Cliff Burton in the band before joining Metallica. Trauma released one album in 1984, Scratch and Scream, and then split to be reformed in 2013. “Hearts of Stone” for the headbangers among us is a very strong opener and yes it’s one of the highlights of the album. After “When I die” it’s time for a mid tempo ballad “the long way home”. “The Walking Dead” also reminds the dark side of the band as they forge pure doom melodies and transform it in another classic heavy metal mid tempo chorus. The songs on the album are characterized by a pervading heaviness and orientation towards 1980s metal aesthetics. However “Rapture and Wrath” is considerably dark. “Rapture and Wrath” is a solid effort made more impressive by the group’s long layoff. For the fans of Hard Rock and Power Metal!