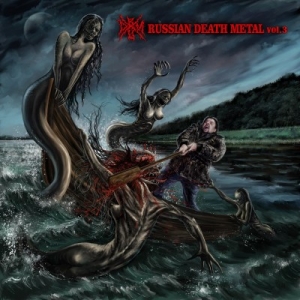 Like both former volumes, this compilation is a joint-(ad)venture in between Darknagar Records and the Russian Death Metal community (and being a registered trademark), and once again it comes with quite cool designed artwork by Onkel Hryum. Eighteen bands are represented with known as well as previously unreleased or new material. And once again the album compiles stuff from different angles and sub-genres within the legendary open-mindedness of the Russian Death Metal scene.

I initially wanted to introduce each single band, but that would bring me too far. It has nothing to do with being lazy, but this isn’t ‘but’ a compilation (not meant the negative way, but… okay, I admit: I’m lazy, haha).

As you can see, there is quite some diversity, once again. It shows a certain open-mindedness, for the Death Metal scene might be accused as lacking inspiration and an own identity lately. Anyway, whether you agree or not, I think that this sampler represents quite a fine elite from the current scene in the Russian Federation. I can truly recommend this to any Death Metal fan, in order to find out which band will convince you to go search for their next official release.