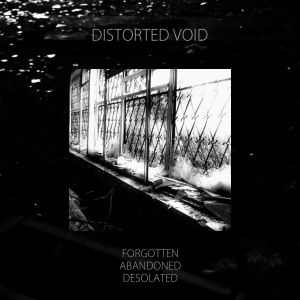 I admit that the ‘Western Worlds’ do have a lot to offer when it comes to (Dark) Ambient and Drone material. But the ‘real’ followers of the scene cannot but recognize the superiority of the East-European / Russian scene too. It would be too stupid to sum up all those great projects at the one hand, or influential labels at the other, but to my opinion the scene ‘out there’ deserves much more support, promotion and attention.

Why this introduction? Well, I have been writing reviews for several band and projects throughout the years that come / came from ‘out there’. And now, recently, I got in touch with Distorted Void, a very young but extremely promising label from the Russian Federation. In a near future, by the way, I will write and publish a review for the sampler The Earth Last Breath, released at the end of October 2018, and containing stuff from thirteen great projects. But a first review I want to do for this label is another compilation / sampler, called Forgotten, Abandoned, Desolated, released in Summer 2018.

Forgotten, Abandoned, Desolated consists of eight tracks by eight different artists / projects from all over the globe. It is a digital release (no idea whether there will be physical copies in the future), available via the known digital sources (cf. the label’s Bandcamp page). I will give a brief description on all of them right here, with a secret hope that there will be much more by all of these projects to come soon! I won’t go to deep into these project’s history / discography (I will whenever I would have the opportunity to review a release totally created by the project involved), but I think it can be important to have an idea of what Distorted Void has to offer.

-) Moloch Conspiracy, Haunted ((05:26): I do have a huge respect for Julien A. Lacroix and his Moloch Conspiracy outlet. I was impressed by the albums The Cave Of Metaphysical Darkness & Lights and Kur. For more info about this artist (and those releases), I’d like to invite you to follow these links: http://www.concreteweb.be/reviews/moloch-conspiracy and http://www.concreteweb.be/reviews/moloch-conspiracy-0. Haunted is a new track, which follows the known path: that of the occult, of the mystic, of the mysterious… It mingles several layers of Dark Ambient, Field Recordings, additional samples (like those voices) and found sounds, canalised into an oppressing, somewhat post-apocalyptic soundtrack. In a gloomy way, it represents a horrific vision in a ritual / spiritual manner, like after entering a secret, forbidden cave or dungeon. Very ‘haunted’ indeed…

-) Psionic Asylum, Wasteland (07:25): this project hails from West Siberia, and as from 2015 they recorded and released almost two hands full of haunting and oppressing stuff. Their contribution is a mostly mesmerizing, almost asphyxiating one, monotonous at first, yet rich because of the many hidden levels. In some way, Wasteland shows a deserted landscape with that oppressing neo-Lovecraftian attitude. Here too, the additional sampled sounds (like those strings) offer an extra level of doom-droning frenzy.

-) Silent Chaos, Cotard’s Syndrome - The Waking Dead (09:01): this duo (Marta NoOne and Ugo Vantini) from the U.K. (Scotland, to be more specific, yet originating from Italy), with a modest discography on their roster, is little more experimental, resulting in a huge pallet of noises and sounds. Their track on this compilation shows their inventive approach. At the one hand, you have those samples, noises, Musique Concrète elements and field recorded sounds; at the other hand, Silent Chaos add many electronic devices and sequenced synth experimentation, with an ominous sphere as result. At the same time, it does sound mechanical yet also transcendental (even extra-terrestrial) in some way. …left alone in the vast outer space…

-) Neraterræ, Transitio (05:11): in a very near future, you will be able to read my (deep-intelligent) thoughts on The Substance Of Perception (Cyclic Law), the new full length by Italy’s one-man army Neraterræ. But first things first, and that’s Alessio Antoni’s part on this album. With Transitio, he offers the audience an extremely cold (Arctic icy it is indeed) dronescape, based on rumbling and distorted frequencies, which are injected by creepy, ‘distant’ sounds / noises, resulting in a somewhat noisy, yet also hypnotic, atmosphere.

-) Dark Voice Of Angelique, Lucy Fire (04:55): I had, honestly, not heard of this Russian project by Ilyah Beloff before, but apparently there is already quite an interesting discography. What this guy brings, is a very rich, even decadent and abundant assemblage of experimental noises, ambient drones and collected sound sources. Despite the short duration of this track, there is a lot to experience, with a permanently evolving intensity and an abyssal-deep atmosphere.

-) Urs Wild, Dark Embrace (07:19): this Swiss artist, who also runs the label Neverspace Records, contributes with a very down-earthed, oppressive piece. Dark Embrace is mainly based on suffocative drones and a heavy dose of darkened ambience, pierces by rumbling roars and multiple layers of addictive and captivating hypnosis. It is great to undergo the cathartic yet dissonant equilibrium - or is it contrast - in between primal monotony and sonic galore.

-) Noctilucant, Traversing The Cavern Of Draugr (03:31): American outfit Noctilucant surprised me a couple of times before with releases on Grey Matter Productions especially. Now returning on this sampler,  Traversing The Cavern Of Draugr stands for oppression, mystery, wrath and sinister. Despite a very limited length, this composition takes the listener’s breath, for this creation is nefarious, heinous, evil. The instrumental part is based on haunting waves of semi-diabolic morbidity, and all this gets strengthened by those pernicious blackened voices. Recorded in the blackest pits…

-) Socium Apathy, Noises In The Darkness (10:50): Socium Apathy are a sister-project to Smersch (from Russia), and somehow both of them are comparable in sound and structure. Call it meditative, evocative, transcendental or convoking, but this (lengthy) composition is, despite another monotonous sonic substratum, so copious and prolific in atmosphere and emotion. The well-balanced combination of elements from Lovecraftian Drone, Ritual Noise and Dark Ambient, has a gloomy, oppressive effect on the listener’s mental state, at the same time terrifying and attractive.

All projects represented on Forgotten, Abandoned, Desolated, or at least their contribution to this album, have one thing in common: the satisfaction of any dark soul’s ear drums. Notwithstanding a different background, Distorted Void succeeded to collect eight related pieces, gathered in darkness and elegance. one conclusion: highly recommended!