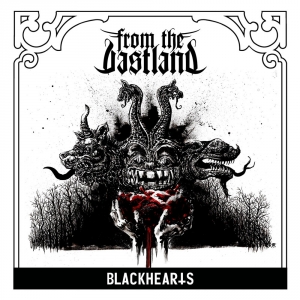 From The Vastland are an outfit by a guy called Sina, originating from Iran’s capital Tehran. In mean time this guy moved over to Trondheim, Norway. Anyway, with From The Vastland, Sina recorded three albums before, being Darkness Vs. Light, The Perpetual Battle (Arx Productions / A5 Production) in 2011, Kamarikan in 2013 (via Indie Recordings), and 2014’s Temple Of Daevas (Non Servian Records). Now the project returns with a three-track EP, Blackhearts, which lasts for a quarter of an hour. The material was recorded, mixed and mastered in Trondheim (Skarp Studio) with producer Christian Falch.

Blackhearts indeed refers to the Nordic grimness of the Norwegian scene rather than the Arab-Oriental elements from the Middle-East, but those trusted with the scene from Iran (and hey, I am not kidding) will not be surprised either. Actually, the Iranian scene is as little and ‘hidden’ as it is great (acts like Margg or Nathorg do surely belong to my preferred ones), but in this project’s case the Norwegian influences are oh so evident. And to be honest, Blackhearts might sounds at least as inspired as many current Scandinavian acts.

Anyway, the first two pieces (Astoyhad and the title song) bring a fast, rhythmic and energetic form of Nordic-styled, gorgorothian Traditional Black Metal with inclusion of a fantastic sound quality. The outro called Abakhtaran is as hypnotic and ominous as it is bombastic, suffocative and martial. Conclusion: top!