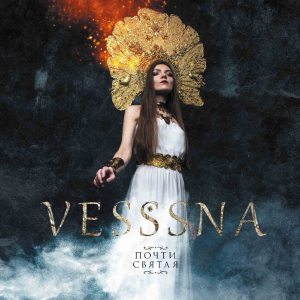 After the passing away of Moscow-based Goth-outfit Fright Night, Marianna Lukianova and Marina Scherba, both of them also involved with e.g. Mea Vita or Vechnost’ Nebytiya, decided to go on under the Vesssna moniker. That name is some word-play for the Russian word for ‘Spring’ (‘vesna’, which used to be a nickname for Marianna apparently). They recorded several tracks, resulting in an EP in 2017 (Ulybka Svobody) and some digitally released singles, and at the very end of Autumn 2018 Vesssna independently released their debut full-length album, called Почти Святая (‘almost a saint’ or ‘just about saint-like’).

…and then it seemed to be time to have this stuff released decently in a physical way too; so eventually the duo decided to have this debut printed on compact disc. With new artwork and the Улыбка Свободы EP as bonus, this re-issue might open the gate for this project to new dimensions. It gets released in a three-folded digipack edition with some fine photography, yet no lyrics (the texts are in Russian, by the way), for those who want to delve into the lyrical content. But I do not think it has to do with materialistic consumerism, industrial evolution or capitalistic progression whatsoever.

What can you expect? Well, Vesssna brings a mixture of Gothic Metal, Gothic Rock, Dark Metal and Classical Music, mainly based on Marianna’s voices. It does not mean that the instrumentation is inferior to the whole concept, but it’s the vocal part that acts like the spine of this material. The voice of Marianna is like a skilled one, not literally operatic in tone, yet surely classically schooled and harmonious. There is a varied range, varying from mid-tone clean to semi-soprano-like. Above all, it comes with a somewhat theatrical level of ‘drama’, which fits to the whole concept. It expresses different emotions, going from introvert to expressive, and from modest to proud. And purely informative, but there are some additional vocal elements too, partly performed by guest / sessions singers as well.

The instrumental side is dual. At the one hand, there is the lead fraction. This one consists of lead guitars and keyboards especially, even though acoustic / semi-acoustic guitars and piano do play an important role as well. The use of (Grand) piano (Marina) often acts as introduction to some of the songs, yet on the background, its subtle performance too is of non-deniable importance. The guitar leads then again do not act as expression of heaviness – Vesssna’s Music is not supposed to be ‘harsh’ or ‘hard’ (although pieces like Датъ Себя Споматъ do come with a certain intensity for sure) – yet strengthen the inherent power anyway. For some reason, it gets done in a comparable vein to Lacrimosa’s era half-nineties / early 2000’s. The few leads too add a flavour of power and persuasion, yet maintaining a modest approach of integrity. It makes the whole sound catchy and low-profile.

At the other hand, the whole rhythm section does forcefully support the main themes. The drum patterns have a certain progressive approach, almost jazzy from time to time, without fading away in some cheap avantgarde adventure. A fine element are the supportive strings at the background: atmospheric guitar lines and a clear-and-present bass line (courtesy of some Vladimir Osenin), and the aforementioned intrinsic (semi) acoustic guitar lines. Here too, keyboards add a dimension of fairylike scenarios (oh, just enjoy those mysterious melodies in Секунды), lifting up, somehow, a folkloristic / semi-traditional attitude (which also appears within the visuals, cf. the photographic addition by Kayana Lis, with front-woman Marianna in traditional costume). Then again, the synth reveal a rather electronic sequence, which sometimes does add a more obscure Goth-tinged atmosphere.

This goes for the bonus-EP especially. The hymns on Улыбка Свободы are little more Dark Goth-oriented, and heavier in the vein of the Fright Night roots. There is less ‘enlightenment’ (or do I have to say: ‘more darkness’?), with more lacrimosian references (i.e. the era in between Stille and Echos).