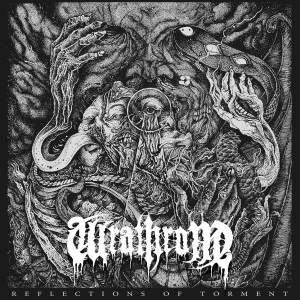 Although the band was formed in 2008, Wrathrone have not been that active actually. In Spring 2013 they independently released the EP Left Unburied, and in very early 2018, Inverse Records released the band’s debut full length album, Born Beneath. Then it took another two years for this Finnish band to release the second full studio album, Reflections Of Torment.

The quintet (vocalist / lyricist Matti, guitar players Vili and Lauri, bassist Pekka and drummer Mikael) recorded this new album live at the V.R. Studio (instruments) and the W-Studio (vocals), and the result got mixed and mastered at the Wolfthrone Studio by notorious master Owe Inborr (of Ondfødt / Dispyt / Gangrened fame). There are (were) 500 copies on CD, including a twelve-page booklet with lyrics (in English) and explicit yet enormously intriguing artwork, created by Pierre Perichaud (painter and tattoo artist aka Business For Satan).

What these guys bring is that kind of Death Metal that made our globe filthy, sordid and dingy decades ago. It is like Carnage breeding with Nihilist / early Entombed, or like a bastard child of Depravity and Autopsy, you know. This dirty Death Metal comes with a fabulous grooving performance and, despite the limitations of this specific style, quite some variation. The main lines are created around fast, grooving riffs, blasting injections and those typifying, abyssal-deep growling grunts, with some (blackened) screams and fat yells too, to make it all even more greasy and foul.

Great is the subtle contrast in between complexity and simplicity. The general structures are not too complicated at all, which gives the whole that no-nonsense attitude. That is, of course, not a bad thing, for it pays tribute to the scene where and when it all started. Yet at the same time, the different levels, and the excellent execution of bass lines, guitar riffs and drum patterns, shows the visceral intelligence behind this recording. It’s dainty in the hearing, yet still with well-thought depth and adventurous excitement.

The sound quality is of a very high level, even though it certainly does remind me of that typifying Swedish sound from many decades ago. The lead guitar riffs do have that buzzing, roaring sound of old, strengthening the old school vibe enormously. Also vocal-wise, the bellowed throat is very reminiscent of that glorious era, (more than) three decades ago. The only thing that might sound little more ‘modernised’ are the splendid drums (though, not all of the time). The faster excerpts, the chopping and blistering salvos are pure old styled, yet some more inventive patterns are 21st century’s in performance. In some strange way, it is catching.

Despite the evident direction, Wrathrone are able to make each single piece different from the others, giving an own face, an own character to each individual track. I do not want to dissect all compositions on Reflections Of Torment, but just as ‘teaser’ I’ll sum up some remarkable passages: a handful of grinding injections (listen for example to the groovy bass-laden intermezzos or the adventurous punky shouts in Bloodline), the sharp solos that are ingeniously executed throughout the whole of the album, the blackened atmosphere (like in Last Journey North, with these glorious melodies, victorious structure, a few blackened vocals, and that proud Unleashed / Amon Amarth-influenced elegance; there are even piano parts included…), the equilibrium in between brutality (both auditive and within the gore atmosphere / concept) and melody (sometimes even epic; listen to Dead Inside Me, especially as from half of the track, or to the opening riffing in Bloodshroud, to have an idea of this well-thought element), the close links to Thrash Metal (cf. the grandiose opening sequence of Bloodline or the basic structures in a piece like End Of Your Sanity) and Doom / Doom-Death Metal (Dead Inside Me, By Dawn They’ll Hang), the Paradise Lost-alike fragments in, for example, When All Light Dies, and so on, and so on…