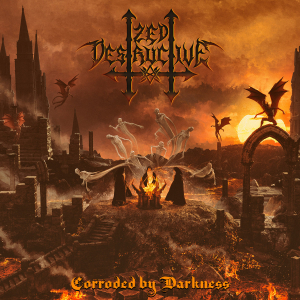 I had not heard of this band before, but apparently that is not that strange. You see, this combo from Israel was formed in 2017, but they did not release anything ‘huge’ and ‘official’ yet. But hey, they might put their moniker on the international map as from now on. Why? Because of Corroded By Darkness.

But first things first. This band was formed by a guy acting under the nickname of Zed Destructive. You might know him from his collaboration with Thokkian Vortex or Winterhorde (I once (2010) wrote a review for this act, but it was on Concreteweb’s former platform, so you can’t find it anymore right here). Zed started this new act after he left Thokkian Vortex, and soon he got joined by some same-minded musicians, amongst which his former Thokkian Vortex colleague Ariel and talented guitarist Dani White.

The basics for the debut album Corroded By Darkness did start around that time, with the full recording done in Winter 2018 at Dani’s (home) studio (both Dani and Zed took care of the production duties too), and with mix and mastering done by Ages Of Atrophy member Ran Reinahy (who also worked with, for example, Edellom, Failed Creation or Aphotik). The stuff gets physically and digitally released in a partnership in between Ukraine-based GrimmDistribution and Russia’s Wings Of Destructions, with the jewel-case compact disc version being limited to (only) three hundred copies. That limited physical one includes an eight-page booklet with the lyrics (in English, by the way), backgrounded by quite apocalyptic, bloodred artwork by American artist Gragoth (Xaemora, Abominant, The Furor, Pestlegion, Magoth, Witnesses a.m.m.).

Corroded In Darkness is an eleven-pieced album (there is a Deicide cover track as bonus on this edition) that clocks fifty-five minutes. It brings a modern, yet at the same time quite timeless approach of Blackened Death Metal, combining theatrical passages with harsh ones, melodic fragments with thunderous blasts, blackened fragments with deadly ones, and up-tempo pieces with restraint.

But the most overwhelming thing must be this album’s technically high-skilled performance. The spine, the veins, the lymphs, the whole corpus is permeated by a high level of, at the one hand, progressed song writing, and, at the other hand, an ingenious execution on all levels: vocals, lead instrumentation, rhythm section, and the whole equilibrium in between all of them. The result overwhelms, leaving no room for abstention and continuously charging. Even the few (semi) acoustic fragments do not define any form of relief or subvention. The permanently ongoing sonic assault march on and on.

The focus surely lies on the fundaments of both traditional and technical Death Metal from the mid-school (an old-schooled basement translated into 21st-centuries reality and existence), and this goes for the whole instrumental and vocal package. Moments of groovy up-tempo joy smoothly interact with almost grinding eruptions of disgust and abhorrence; then again ingeniously high-tech constructions get penetrated by pounding no-nonsense riffage or hammering nihilism (with ‘nihilism’ being defined as much more than an empty statement!).

At times, it does sound ‘classic’, reminding me (us) of the glorious past. The glory of the old(er) school did surely influence this recording, without expiring in a cheap copycat entity. Personally, I do appreciate that tribute to the Old School because the use of elements from toe ‘roots’ remain quite virginal; I mean, they are not raped and abused for stupid, hollow purposes (unfortunately, this happens way too much, but not in this recording’s case). But at the same time, that ‘classic’ approach interacts well with a modernistic one too. Once again purely personal, but modern progressions often leads to artificially constructed products. Yet here too, Zed Destructive somehow know how to avoid predictability, superficiality and vain.

I may (and must) add my (personal / subjective) thoughts on this band’s own-faced reality. I do not think they did find their distinctive majesty yet. No, there is no copy-cat identity at all (even though you might surely dissect their appreciation for the Scandinavian early-Nineties scene for sure), but I am sure that Zed Destructive must, and will, evolve, in order to develop their own, idiomatic sound. They surely do have some specific features – a piece like the mighty title track explains a lot – and I do foresee a great future. As for now, I think that Corroded By Darkness is a masterful first step, which will surely lead to a condign worldwide appreciation. This outfit has about everything to reach a dedicated and devoted  audience. It’s up to them to choose in between a huge mainstream audience (success might be a nasty result) or a smaller yet convinced, sequacious committed one. I go with the latter, and I think this project / band might get that far.

It would not be fair not to mention Zed Destructive’s cover of The Truth Above by a band called Deicide – you might have heard about them, haha. This is another example of Zed Destructive’s fine approach. They could have chosen for a recent anthem by – no, I will not mention any name here – but they did choose to cover a piece from last century, once again strengthening their dedication to the origins of all Aural Evil. It’s a good choice, I think, and besides, their reinterpretation of this (great) track is at least ‘memorable’ too.

Aaaaaah, I do look forward to experience this band’s next, progressed outcome. I hope they will not go the ‘popular’ way (there are enough Behemoth clones around), but if they deepen into their own potentials and opportunities… You know… Yet, until then, Corroded By Darkness surely is a recommendation for all fans of straight-forward Blackened Death Metal!