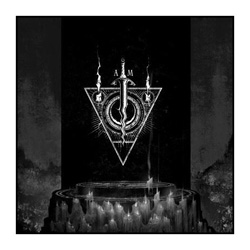 Ancient Moon are quite a mysterious project for the three members act under the names of J, O and B, and nothing more is known. Apparently these guys hail from Belgium, France and Switzerland. I think Vvltvre is their first mutual effort, and it consists of one single piece, called Preastigitum Altareas, clocking almost half an hour.

[personal note: I do appreciate the fact that the sole track and the album itself do have another title]

Oh yes, before taking off: Vvltvre comes in an edition of 500 copies only, and gets released by three of my favourite labels: Russia’s Satanath Records (thanks to Aleksey once again for sending me this wonderful material!), UK-based Cold Raw Records and Greece’s Metal Throne Productions. And a small note about the lay-out: great! It makes the whole even more mystic, occult, mysterious. The cover is just wonderful (a kind of altar, I think, and candles), including the project’s nice sigil / logo; and the picture on the inside makes me wanting to be best friends with those guys, haha…

Anyway, Preastigitum Altareas starts with quite a hypnotic, atmospheric and grim guitar melody, repetitive and melodious, breathing abyssal fog and funereal desolation, supported at the background by a distant noise. And ‘noise’, that’s what after about two minutes sort of defines the core-approach of this act. In a rather cacophonous way, elements from Drone, Black Metal, Blast and Ritual Ambience interfere whole the time, balancing towards the one angle, then again towards the other, all the time strengthening each other towards a whirlwind of apocalyptic Aural Art. I hear aspects from Ævangelist, earlier Void Of Silence, Nihill, Urna, Altar Of Plagues, Gnaw Their Tongues and Khost (amongst tens of others, and still none), yet then again it is quite an own angle Ancient Moon do attend.

Despite being one ‘composition’ only, there is a huge dose of variety, with quite some differentiation in speed, structure, vocal timbres and execution. Though, the atmosphere is a permanently present constant that means nothing but negative feelings: hate, anger, despair, psychosis, frenzy, doom, malignancy, misanthropy, grief, disgust, nihilism. Quite the same ‘feeling’ goes for the production, which indeed is pretty noisy and rusty - maybe even somewhat ‘too’ unpolished? But besides quite distorted outbursts, the atmospheric ambiental passages (like the creepy synth-intermezzo at eighteen minutes or the abruptum-esque organ-pieces at the end) then again sound quite divine (yeah, what a contradictio in terminis).