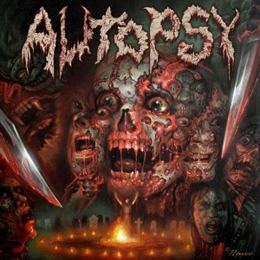 More than twenty five years ago our beautifully smelly Earth got festered when Autopsy decided to exist. Through miscreants like Severed Survival and Acts Of The Unspeakable, the quartet injected the American Death Metal scene with their own vision of gore and terror, and undersigned was pleased. I saw it was good… Autopsy unfortunately disbanded in 1995 and some of the members continued under the moniker of Abscess, another great, and slightly comparable act with messages of love and peace, evidently.

Then, suddenly, out of the deep-blue, Chris Reifert, Eric Cutler, Joe Trevisano and Danny Coralles decided to reform Autopsy -we’re talking 2010- and after the EP The Tomb Within, Autopsy surprised the audience with Macabre Eternal, which proved that these four guys were still as sick-minded as decades ago. Earlier this year, they had some more newly written material recorded and mixed at California’s Fantasy Studios with Adam Munoz, who did work with that other project, Abscess, as well. The result is called The Headless Ritual, lasting for forty four minutes, and coming with sweet artwork by renowned artist Joe Petagno.

Like Macabre Eternal, The Headless Ritual brings back the Old Skool with a massive, somewhat modernised production. Further on no new gadgets or experimental progression, for Autopsy do what they always did: performing slaughtering, brutal and awful extremity of the most macabre and sinister kind. More than once, the equilibrium in between ultra-slow intermezzos and violent rhythm insanity grabs you by your throat, and this detail makes this album probably the most haunting to date. Listen for example to the second part of opener Slaughter At Beast House and you’ll understand. The contribution of each single member has been worked out perfectly (read: what a fantastic mix!). Not only are the individual qualities logical elements, nor the perfect interaction in between the foursome. It makes every single track on the album a great piece of musical craftsmanship with nothing but superlatives when listening to it.

For sure one of the best Death Metal releases from 2013!