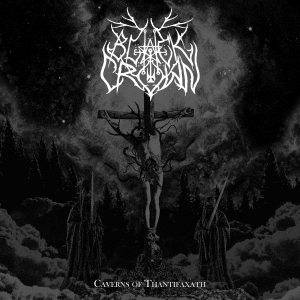 A short one, yet one way too important not to pay attention to…

Black Crown is a new / young project, a duo consisting of ex-Necrophagia / Haxxan’s Jake Arnette aka The Mountain Vvitch and Heretic. Together with session drummer Nick Chiudioni, the main members wrote, recorded and finished a first album, a full-length called Caverns Of Thantifaxath (named after an archdemon from Set’s household, the Great Ghoul as protector of a pathway (a tunnel) to the next universe). The duo (trio) recorded this debut at the Chapel Of The Black Blood studio, being produced by Danny Cullman (Central 8 Studios). The result is a nine-track album, being released in a partnership of three highly interesting labels, being Russia’s Satanath Records and More Hate Productions, and The End Of Time Records from Ireland. Besides the digital version, there is a ‘normal’ compact disc, including a very sober twelve-page booklet, which includes the English lyrics. These ones deal with ancient and modern demonism and the summoning of evil’s disciples, with dukes and deities of the Underworld, and with occult / ritual mythology.

Caverns Of Thantifaxath stands for an extremely filthy, somewhat necrotic-sounding form of blackened fury, mingling Blackened Death Metal, Necro-Black Metal and Melodic Occult Black Metal. There is a huge demonic atmosphere covering the whole album, somewhat sinister in essence, and therefor ultimately bleak and grim to the core. The better part is based on melodious structures, led by fine-tuned strings; the latter paying attention to both electric and bass guitars. Thanks to the well-balanced mix, it is a true pleasure to experience these bass lines so intensively and lively. In a piece like Scarlet Goddess, by the way, these basses even add an enormous epic touch of victorious elegance!

There is quite some variation in tempo and construction, yet without exaggeration. The better part id mid- to up-tempo in speed, with quite some accelerations and decelerations, and once in a while also a semi-blasting assault. The rhythm has something chopping, caused especially by the hammering drum patterns. However, there is a lot of variety within the drum salvos too. And here too, that professional sound quality isn’t but a surplus.

A fine element is the use of woodwinds in pieces like, for example, The Nine Hells or The Dweller; a track, by the way, I would like to recommend as listening experience / acquaintance, in case you want to try this material by picking one single song. The Dweller has all aspects that characterise this album, and more (like those woodwinds intermezzi): subtle tempo-changes, that diverse drum-work, that nice twin-balanced guitar play, and -which I did not mention yet – those voices, spawn from sulphur and acid sources. Alongside this wretched throat, there are some deeper, beastly grunts too (the summoning sequences for the evil serpent Basmu in Swallow The Sun, for instance, or the invocations in The Nine Hells).

Another fine detail is a piece like Qliphotic Meditations, an instrumental, (semi) acoustic intermezzo, as a moment of respiration and introspection amidst the overload of morbid and occult warmonger and manifests of blaspheme ceremonies and diabolical evocations (cf. the lyrical content). But the better part, as mentioned, is harsh, overpowering, merciless and extremely stubborn. The principles come from the Old School, but Black Crown can’t just be considered an old-styled entity, for their unique and universal approach transcends the limitations of any era. It does not mean that this material sounds modernistic, for that’s not the case either.

Anyway, I wanted to keep it brief this time, but that does not mean that I do not enjoy this stuff. On the contrary, after several listens, Caverns Of Thantifaxath keeps on growing in my mind; it’s almost addictive to plunge into the dimension, as if all of those demons did enter my world. Lepaca Ashtaroth, lepaca Bašmu, lepaca all of them…