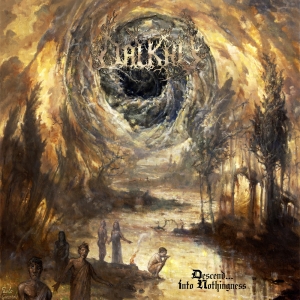 Dalkhu are a Slovenian duo that recorded one full length before (back then Dalkhu were a four-piece), 2010’s Imperator, which was independently released. And now they return with a second one, which was recorded from August 2014 till January 2015 at the Nightside Studio, and mastered at the famous Necromorbus Studio by Tore Stjerna. This sophomore album was firstly released digitally by the band itself, and at the same time on CD via Satanath Records and Darzamadicus Records, and in mean time there’s a vinyl edition too (Iron Bonehead Productions) and a tape-version (Godz Ov War Productions).

Anyway, Descend… Into Nothingness clocks forty four minutes and it brings a very ‘full’ form of Death / Black Metal. ‘full’ goes for both approach and sound; let’s say something about the latter. Indeed the production is heavy-as-f*ck, brutally slamming and hammering, but the quasi-exaggeration surely gets its goal: strengthening, empowering the performant results. I think the mix is fabulous, for once again all players (the different instrumental / vocal ingredients) come to their right. Personally I do appreciate the somewhat dense, misty sound collage. Cool!

Music-wise Dalkhu combine a frenzy and colossal massiveness with quite a haunting atmosphere, and actually that contradictive interplay does work somehow. The execution is of a technically skilled kind, yet with lots of old schooled, little epic (truly subtle but impossible to ignore!) and groovy elements. In general, the tempo is fast, including some violent outbursts (especially the drum patterns [performed by a session drummer called Spawn of the Void] and several of the trem riffs cause the intensity of those powerful eruptions), but band leader J.G. did not forget to write some calmer excerpts too. And I cannot but at least mention P.Ž.’s vocals, for these are of a mostly incredibly deep-guttural kind. I do not exaggerate if I say that this guy’s throat must be fueled by napalm-injected acid and liquid razor wires.