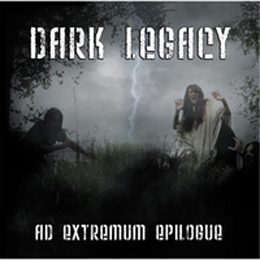 Swedish Dark Legacy were formed in 1996 as Rest In Peace. Back then, the band played brutal Heavy / Power Metal, both own songs as well as covers. Rest In Peace was very active as live-band, and they did millions of gigs (or at least more than hundred). In 2005, the band underwent some important and determining modifications. The line-up changed and the members wanted to play a darker and more oppressive form of Extreme Metal. That’s why they decided to change the Rest In Peace-moniker into the current one, Dark Legacy, because that would better fit to the new musical direction. Besides, there was enough self-written material, which got more preferable than performing cover songs especially. A new chapter indeed…

In 2012 Dark Legacy decided to record the best songs they wrote themselves throughout their history. At the end of 2013, Dark Legacy were able to sign a deal with Swedish label Black Vulture Records too, and it brings me to Ad Extremum Epilogue, the debut of the band after more than a decade and a half of existence.

But in case you appreciate a more operatic approach of dark-edged and atmospheric Metal, then it was worth waiting for! Ad Extremum Epilogue (length: almost three quarters of an hour) brings a totally different kind of Metal than Rest In Peace. Completely gone are the traditional elements from the past; enter atmosphere, obscurity and emotionality. This stuff is of the spherical Gothic / Dark / Doom / Death Metal kind that will appeal to (all) fans of symphonic, operatic and melodic Metal. The music combines deep grunts and pounding riffs, a melodic rhythm section and melodic leads, with neo-classical and / or acoustic passages, but most important of all: a leading role for the keyboards. No matter if it’s a heavier or a calm, integer piece: the keyboards lead; they do not just accompany the whole; they carry the whole.

Despite some outbursts and despite the death grunts, Ad Extremum Epilogue certainly is not a harsh album at all. Sometimes it even sounds poppy and catchy. Therefore I think it is meant to please a rather limited, specific fan-base only.