Eclipse Of The Sun 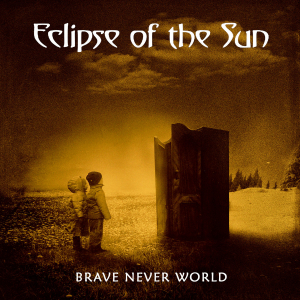 The history of Hungarian band Eclipse Of The Sun goes back to the very end of this century’s first decade. Hailing from the city of Székesfehérvár (close to the Balaton lake, appreciated enormously by undersigned for its fine winery – egészségére!), as a five-piece they did create a first untitled demonstrational EP, soon followed by Symbols, consisting of four new tracks. Several line-up changes followed throughout the years, but in 2015, the band came up with their first official full-length album, Daimonion (independently released). Oh yes, there was a compilation too, FYI.

More changes in line-up did happen, and things went silent somehow. But eventually, in 2019 Eclipse Of The Sun started recording new material, which was written (music and lyrics) by frontman Dániel Szöllösi. This new stuff got gathered as Brave Never World and was conceived by Dániel (clean and harsh vocals, guitars and keyboards) in collaboration with bass player Gyorgy Kantár (also part of this band as from the very beginning), newly recruited drummer Dávid Antal (with a huge experience within the Progressive scene, by the way), and guitarist Gergö Kovács (who worked on the previous long-player Daimonion too).

Everything was recorded in the band’s home studio, and eventually mixed and mastered by Dániel. Eight compositions made it to the definitive version of Brave Never World, which saw the light in Spring 2020 via a collaboration, once again, of two highly interesting labels from Russian soil, More Hate Productions and Satanath Records. Besides a digital edition, there are 500 copies on compact disc, i.e. a jewel-case CD with an eight-page booklet. This one does contain extremely intriguing artwork (cover and inlay; check the details and feel the pettiness of being; courtesy of photographer Emese Durcka Laki, known for her nice pictures of kids), simply in black-and-white outlay (except for the cover, done in sepia), and with inclusion of the texts (in English).

Brave Never World clocks almost fifty minutes and stands for a quite traditional yet still distinctive form of Doom-Death Metal with a huge My Dying Bride attitude. This does not mean that this album is a copy of any My Dying Bride composition, but the eccentricity of these English masters has certainly been a huge source of inspiration for this Hungarian act.

Anyway, this material is very melodious in execution, with lots of changes in tempo and structure. The spine is built around heavy, sometimes even intense guitar melodies, heavily supported by monumental rhythms and riffs. The string section combines a dreamy, moody, gloomy melodicism with a powerful and pounding background energy. This gets organically supported by cool drum work, with both orthodox and eccentric patterns. Also the use of keyboards gets done with precision. Sometimes purely atmospheric, then again prominent, those synth lines, when represented, give the whole that little something more, accompanying the listener through spheres of the mystic and the epic.

Vocal-wise, there is a lot of variation too. Dániel is not a cheap copycat of Aaron S., but his range is comparable: crooning and harmonious clean vocals, spoken words, whispers, deep grunts and bleak screams; his vocal range is quite bulky, yet steadfast for sure. Besides, his pronunciation of the English language is exceptionally satisfying (which is not that evident when talking about the East-European scene, to be honest). Okay, this is somewhat exaggerated, yet still his tongue is clearly understandable.

Besides, there are other elements that are remarkable – and a surplus: samples, acoustic and semi-acoustic passages, a perfect equilibrium in between atmosphere and harshness, the mature approach and performance, a fabulously ingenious lyrical approach, harmonious choir chants, a well-thought balance in between tradition and progression (beware: Eclipse Of The Sun are not a Prog band, yet they do trespass the border of the Old School with some rather modernistic ideas and present-day implementations). There’s a theatrical level of drama going on, yet fortunately lacking exaggeration, drenching the whole experience in a space of open-mindedness and creativity.

The sound is extremely polished, yet not too clinically smooth. Mostly positive is the well-balanced mix, i.e. that every individual instrument (vocals included) has its role to play, yet does play upon its importance for sure as well. Leads and rhythm instrumentation, voices and instruments, back and foreground performance; everything gets figured in a fine-tuned equilibrium, all elements are of importance to result into this vast experience of darkened beauty and lightless elegance.

Recommended if you can appreciate material in the vein of (contemporary) My Dying Bride, Katatonia, Sentenced, Draconian, (early) Amorphis, Paradise Lost, Morgion and the likes…