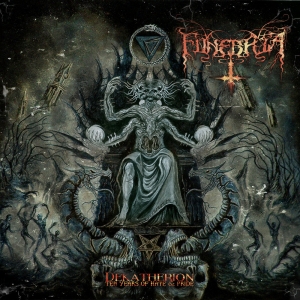 Funebria are a Black Metal act from Venezuela, but outside their home country, I do not think they are well-known. …until now, for having Satanath Records taking care of their new full length. Actually, in their ten years of existence (the band was formed in 2004) they didn’t release that much stuff: a demo, an EP and one full length (all of them during the last decade), and in 2012 they contributed on the Two Headed Beast split with Veldraveth. Dekatherion – Ten Years Of Hate & Pride is the band’s second full length, and despite the name it isn’t a compilation from the past, yet rather a megalomaniac self-tribute.

The album lasts for forty three minutes and finds its origins within the nastiest, deepest and foulest corners of the Death / Black scene. My first impressions accompany my thoughts to the scenes from Sweden and Finland, yet especially the ones from Russia and, for sure, Poland. But then again, the typifying elements from the South-American scene, and then I am referring to the black-thrashing evilness, the morbid primitivism and the pre-technical and militant sonic violence, cannot be ignored either.

The stuff relies on heavily steamrolling rhythms and crafted tremolo leads, throaty screams, and technically well-composed riffs, but at the same time inspired by, and yet distinctive from, yet still dwelling within, the scene build around acts like Behemoth, very early Cradle Of Filth, Vintersemestre and Blood Of Kingu. Personally I do miss inspiration and identification, and I think the execution and the sound quality are way too fake. It’s not that this stuff is bad, for it is not. But seen the current possibilities, the actual efforts going on, Funebria do disappoint.