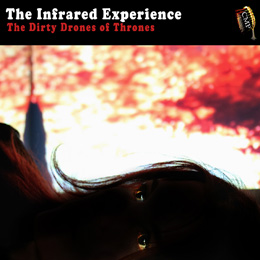 Recently I got in touch with Ralf ‘Ralli’ Rabendorn, a talented musician / producer / photographer, but also the guy behind the label ContraMusikProduktion (together with Against It Records known as convinced promotors for Anti-Music). The honest approach of this guy and both labels, as well as the projects on the labels’ roster, made me curious and interested, and willing to work with them. Ralli did send the Concreteweb headquarters some material which I did look forward to. And in not one single case it did disappoint me. In the next couple of days / weeks you will find more reviews (for his self-called solo-outfit, as well as for Testphasen Negativ and Seven Morgues), but let’s start with the most recent release on ContraMusikProduktion, i.e. The Dirty Drones Of Thrones by The Infrared Experience.

After White (2009) and Memories, Waves & Frowns (2011) (there was a split too in between both albums), things seemed to fade away in total silence. But now The Infrared Experience return with their third album, recorded and mastered by Ralf for Medusada Productions. Once again he took care of the visuals too (artwork + pictures, except for the pictures on the CD itself).

[note about Medusada Productions: ‘medusada’ is a neologism created by some German ‘experimental thinkers’, amongst whom Ralf, to define a specific ‘anti-genre’. The word is a combination of Medusa, the snake-haired sweety from the Hellenic mythology, and DaDa, the experimental, avant-garde movement. It is meant to define trespassing limitations: ‘remove all barriers’; therefor it’s the self-invented description for the stylistic approach of most bands / projects on both ContraMusikProduktion and Against It Records - ivan]

The Dirty Drones Of Thrones brings more than forty minutes of material created by guitars and effect pedals only; no synths, no voices, no tricks or gimmicks were used. And the result is like one long-stretched mantra, a weird, psychedelic drone, a trip through man’s brain to make you conscious of the futility and triviality of life, politics, modernism and human needs. The atmosphere goes very deep, abyssal deep, with a certain obscurity beneath the surface, yet without getting rid of any psychedelic form of hypnosis either. It might refer to genres like Post-Rock and Shoegaze, Ambient and why not, even (early) Seventies-oriented guitar-laden Psychedelica too. Great too is the variation, for some pieces are rather of the mesmerizing, introspective ambient kind, while others are more closely related to softly droning guitar melodies (indeed written in italic script for… well, listen and you’ll understand) or quasi-trippy journeys through dimensions of both the world of fantasy as well as reality (heart and mind, you see). And despite the lack of synths, more than once I have a feeling of Minimal Industrial Ambience too (and who am I to disagree with such grandeur?).

I do not think it is absurd to refer to musicians like Aidan Baker to give a hint, a glimpse of this project’s aural approach; though a label like Belgium’s finest ConSouling Sounds too might be a reference. And when referring to that ‘Minimal Industrial Ambience’ (see former paragraph), I am not ashamed to mention the likes of Cyclic Law a.o.

Finally this: the CD appears in a limited edition, including a folded eight-page booklet in rather thick material, and it was released on the first day of Spring 2015, perfect for dark hazy drones…

All hail the toothbrush!