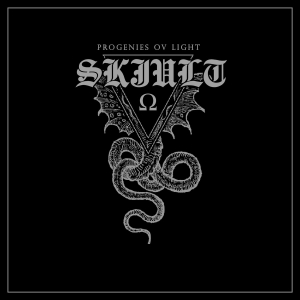 I have to admit that I do not know more than five or six, maybe seven bands from Cuba when it comes to the harsher side of the music(k)al spectrum. Yet as from now on, I can add another one to this (way too limited) list: Skjult. Apparently it is the brainchild of one Conspirator, born as Javier Rodriguez Prendes. The guy seems to be the former bass player of bands like The Chaos Nether Silence, Heretik or Darkening, and currently he’s active as sole member under monikers like Shrine Ov Absurd, Thore and this one, Skjult. The latter was formed in 2015, and in Winter 2016 he recorded and released the album Within The Flesh; first independently, then via Cvlminis, and later that very same year through Satanarsa Records and Old Spirit Productions.

In early 2017, Conspirator entered the Havana-based Profane Misanthropic Craft Studio to record his second official album, Progenies Ov Light. He wrote, recorded, produced everything himself; even the lay-out and extremely fine cover artwork are from his hand / mind. The album gets released via Russia’s Satanath Records (thanks to Aleksey to introduce me to this band!) in conspiracy with a new label, Black Metal Propaganda Deutschland from, indeed, Deutschland. The six-page, three-folded booklet contains the lyrics (in English), which deal with misanthropy, darkness, blasphemy and hatred.

Progenies Ov Light convinces as from the very beginning, even though it lacks originality. The project finds its inspiration within the scene of the Nineties, even though the sound quality adds a contemporary touch. It does not mean that the production is too clean, for it surely maintains that necessary dark-edged roughness. The mix however is very modern in a decent way, with a perfect balance in between all instruments.

In general, the nine hymns on Progenies Ov Light are melodic, fast-paced and obscure. These three things (melody, tempo and darkness) will be explained little more. When it comes to the melodic part, especially the string section comes with those structures that were not that uncommon two decades ago in Scandinavia. It does not mean that Skjult are a rip-off from the Norwegian or Swedish scene. But in combination with the technical execution, the melodies are very comparable to that glorious past. Besides, the firm rhythm section heavily supports the melodious ‘spine’. Especially the drums convince. This easily brings me to the speed. As said, most parts are energetic and fast, with some explosive excerpts too. Here are the drum patterns again, for they thunder and blast quite often. But the great thing is that there is a lot of variety within the drums / percussion section: artillery salvos are nicely interspersed by almost organic drum parts. Anyway, the up-tempo character sometimes gets injected by slower passages too, which is nothing but a surplus. These decelerated chapters are almost suffocating, for they are oh so doomed and grim. It even reveals hints of the earliest pre-Post efforts from Norwegian soil (Khold / Taake and co.). Tertio, the obscurity I was referring too, is obvious. Take the vocal timbre, for example. Conspirator has not that typifying ‘scream’ that is not uncommon within the Black Metal scene, and it is certainly not of the ‘high-pitched’ kind. Still is sounds bleak and guttural, like breathing burning sulphur. The whole atmosphere is oppressive and rejected of light, and this too reminds me of the Scandinavian scene from the end of last century.

Oh yes, the album ends with a track that acts as a tribute for late Trondr Nefas (Vulture Lord, Beastcraft, Bloodsworn, Urgehal, Angst Skvadron and many more; rest in peace, brother). It’s f*cked-up, beastly, maniacal, malicious and barbarian, so just great. Trond, say ‘thank you’ from the great hall where you’re drinking with Quorthon and all of our brothers-in-arms!