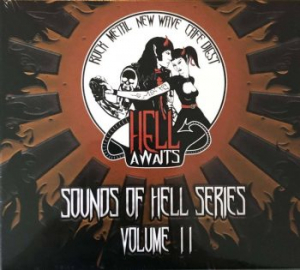 After a Volume I, quite often, normally, there might be a Volume II as well. And ah, this proves that we, people from the Lowlands, are smart asses, because our respectful Hell Awaits crew and their young Sounds Of Hell promotion and distribution outfit indeed came up with a second volume, which, indeed, follows the first one (logic thinking is courtesy of Flemish soil for sure). And to stipulate our local intelligence even more: these guys from Diest are working on a third chapter (almost two hands full of bands did already sign), which will be called -and kneel in wonder- Volume III indeed! The circle is round after all…

No, let’s be serious (for a while). The goal of this compilation series is to promote and support the scene from Flanders, as well as Wallonia (the French-speaking South of Belgium) and the Netherlands. And this goes for a lot of genres, as long as they have to do with Metal, Punk or Rock Music in general, old schooled or modern, intense or integer, good or even better. Anyway, I’d like to refer to my review on the first sampler (link below) if you do want to read some more background information on the pub where it all started and the (hi)story behind the concept. I am going to repeat it right now.

In the vein of the first volume, this second edition comes as digipack with inclusion of a professionally printed A5-sized twelve-page booklet, which includes a brief introduction to each project involved. Actually, it’s ridiculously cheap to buy (€ 7,5, via the label or each of the combos involved), and for sure it might be such great introduction to bands you might not have listened to yet, but that might be your enthralling cup of (sweet or acid – up to you to choose) tea. Oh yes, the cover artwork is about the same as the first time, yet with another front colour (rather brownish instead of dark-red). I think it’s another intelligent idea to maintain the visual concept, to focus deeply on what the aim of this series is (as said: to support the regional (underground) scene).

Like the former volume, I will not go too deep into each project’s biography or history, but a small introduction and some personal thoughts on their tracks involved will follow. This time, there are fifteen bands included (the former compilation consisted of eighteen bands / songs), yet still that’s an impressive representation of our local greatness for sure!

Coming up next: Sounds Of Hell Series Volume III, Demenzia Mortis’s AntiKult, and everything else that might destroy your ear-drums!