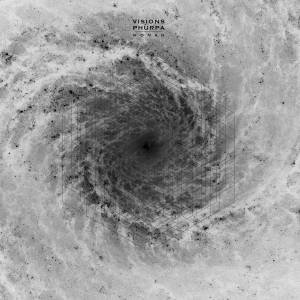 Ah, what a great surprise. Okay, when a label celebrates its 100th release, it is like party time, but when they come up with a fabulous soundtrack to enrich that festivity…

So, Frederic Arbour, who runs the fabulous Cyclic Law label (without doubt one of my beloved ones within the huge scene), decided to release a special collaboration as 100th release, exclusive and enthralling for a thousand reasons. Monad has become a thrilling co-operation of two notorious artists. At the one hand, we have Frederic himself, with his enigmatic project Visions (I was afraid this outfit was put to rest, but my fear was unfair), joining forces with, at the other hand, Russia’s finest Phurpa, a minimal-shamanistic outlet of Alexey Tegin. The latter is no stranger to the label either, for there were some joint adventures in the past. Examples: Phurpa (http://www.concreteweb.be/reviews/phurpa) or Gyer Ro (http://www.concreteweb.be/reviews/phurpa-0).

Monad clocks about forty minutes, and the four tracks get released on vinyl (200 copies) and compact disc (500 copies in a four-panel digipack). Of course you can also find a downloadable edition via the label’s Bandcamp page. Everything was eventually mixed and mastered by Frederic himself.

And it is almost impossible to believe, but Monad is a purest symbiosis of both Phurpa and Visions. The compositions stand for a meditative, contemplative and transcendental form of Ritual Ambient, minimalistic in essence, but rich in execution. Let’s take opener Ascendance, for example. It’s a multi-layered, slowly droning piece, based on hypnotic, somewhat eerie synth lines, which remind me a lot of Visions’ Dark Ambient majesty, injected with the tantric humming voices and bells / chimes of Phurpa (rgyud-skad throat-singing). Besides, there are different sound samples implemented, which strengthen the fullness of the sound. It’s slow, it’s formless, it’s spiritual for sure as well. Fohat is more ‘floating’ in essence, astral-transcendental of nature, making use of different sound sources once again, as well as different sound manipulations. These noises increase throughout the whole track, slowly and subtly, too smooth to get disturbing. The title track is the most haunting out of four. I would almost add ‘Lovecraftian’ to define the intense, suffocative atmosphere. This aural ritual somehow refers to our connection with the sacred elements of nature, whether these ones are destructive or to be integrated in humanity’s presence. Here too the delicate multiple on sonic levels sounds incredibly subtle and, at the same time, voluptuous, even opulent in its modesty. Reminiscence, finally, is the most ‘energetic’ one, oppressive and fertile at once. More synth layers and more prominent overtone vocals, and less additional sound fragments characterise a truly mesmerizing aural adventure, being post-dimensional and, at the same time, so deeply introspective.

Up to another 100 of superior releases! Congrats, Frederic and crew!