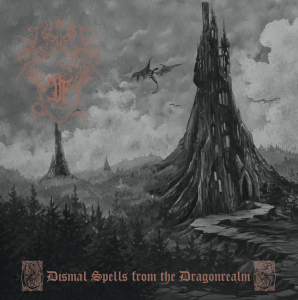 For Black Metal and related scenes are rooted in Will and Power, the Luciferian temple Werewolf Records was created more than two decades ago to support the true Underground scene. No fake bullshit, no gimmicks, no trends; just the purest expression of ‘the original vitality of the dark magic art’ in order to ‘continue to grow and create the foundations for an empire’. Hail the wolves!

This great Finnish label, which is owned by no one else but Lauri of The True Werwolf / Satanic Warmaster / Horna / …-fame, recently released the third album of Druadan Forest, in a partnership with Hells Headbangers. Druadan Forest is the brainchild of Ville ‘v-KhaoZ’ Pallonen, whom you might (currently or formerly) know from majestic bands and projects like Oath, Hiisi, Azaghal, Marras, Vargrav or Kalmankantaja, amongst others.

This solo-outfit was created at the end of last century, but after three demonstrational recordings, Druadan Forest was put on hold. However, in 2016 v-KhaoZ (or V-Khaoz) took the intelligent decision to continue with this project, and as from then, Druadan Forest became quite productive. Some full lengths and marvellous splits got recorded, and this is not the end yet. Shortly after this specific release, there was another split too, with Uruk-Hai and Bannwald (via Antiq, available as from early February), which I will review and publish soon too. But first things first, and that’s Dismal Spells From The Dragonrealm.

Every album goes further where the former one ended, without be(com)ing a copy of the past. Dismal Spells From The Dragonrealm too differs from The Lost Dimension (the second full-length, Wolfspell Records, 2017) or the split with The True Werwolf (indeed the outfit of this label’s chief Lauri ‘Werwolf’, released via Werewolf Records). It’s an extremely lengthy one, for the four pieces last in between sixteen and twenty minutes. It is available via the label’s Bandcamp page for digital download, as well as on compact disc and vinyl (as double-LP). And the magnificent artwork was created once again by Moonroot Artworks from Czechia (think Goatcraft, Nokturnal Mortum, Kval, Waldeinsamkeit, Illusions Dead or Automb, amongst hundreds of others).

As said, the four compositions are quite lengthy, and sort of divided into separated yet organically cohesive chapters. It is like a grandiose mixture, or hybrid, of esoteric Dungeon Synth, mystic Ambient and ritualistic Atmospheric Music. Both theme and sonic approach mingle folklore, magic, fantasy, epicism and dream, canalising everything into one fantastic journey through mysterious worlds beyond man’s imagination. Imagine the earliest works of Mortiis, yet little more adventurous and abundant, less repetitive, and at least as intriguing, with an own brave character [no, I am not pretending that Druadan Forest sound like Mortiis; it’s just the conceptual and basic content I am referring to]. The huge variation, the permanent evolution, climbing high to misty peaks and towers, then again descending into abyssal realms, is a surplus that makes this excursion continuously arousing.

Another very important element is the discreet use of the vocals. Modest and subtle, several excerpts make use of different vocal additions, sometimes blackened, then again narrative, adjuring or whispered. Also the use of samples from natural sources (wind, water drops, crows), once again used in a very subtle yet not-to-underestimate way, adds value to the total package.

So, Dismal Spells From The Dragonrealm is the most intimate and atmospheric Druadan Forest album to date. It gathers elements from related genres, amalgamating all these things into one fabulous sonic adventure, focusing on melancholia, illumination and mysticism. With absorbing titles like Unsung Spell Of No Solace, Enthralled By Majestic Winters Eternity, The Seizure Of Power In The Luminous Lands By The Hands Of The Stalking Fiends and No Stars Upon The Black Sea Of Macrocosm, one undoubtably cannot but expect a grand opus. Indeed it is!