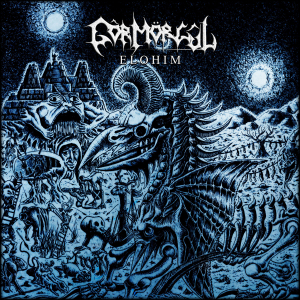 For more than a decade, Gôr Mörgûl dwell around to bring us their message of blasphemy and black magic. With Elohim, this band from Sardinia, Italy, brings forth their third full length opus, continuing the path they started in 2010 with In The Sign Of Blackness, followed by the EP Ruins Of The Icons Of God (2014) and the second full album, Heresy (2015). One again we had to wait quite some time, but Elohim might be worth waiting for so long.

The album gets released once more in the partnership of Satanath Records from the Russian Federation and Death Portal Studio from the U.S. It’s an eight-tracker that gets released in a regular CD-edition (i.e. jewel case) (500 physical copies, besides the digital ones) with a four-page booklet that includes quite unusual and strange, experimental cover artwork, but no lyrics, unfortunately (which are, by the way, in English, Latin and ancient Greek).

Totally in the vein of the former works, Elohim stands for more than half an hour of intense, energetic and mainly fast (1), yet quite melodic (2) and varying (3) Technical Death Metal (4) with a blackened edge (5). I’ll go little deeper into these things.

Elohim is not a renewing album, for it represents a sub-trend that exists for a while. It does not reinvent the scene, not opens it the portal to another sonic dimension. But within its specific genre, it is one of the better recordings in quite some time. Recommended if you appreciate everything in the vein of, let’s say, Neter, Blood Of Kingu, Dalkhu, Archgoat, Preludium, Veld, Demonic Obedience, Misanthropic Existence and Akhenaten; even fans of Arkhon Infaustus, Behemoth, Azarath or Morbosidad might adore this material…