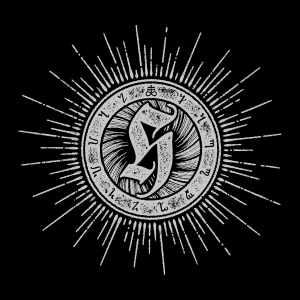 This review does not deal with the band Hadopelagyal from the German city of Leipzig, yet with the band Hadopelagial from the German city of Leipzig. Confused? Well, when I did receive two releases at around the same moment, both by a band from Leipzig with (almost) the very same name, except for one single letter, I was sort of confused as well. But as said, this review won’t focus on the split with Thorybos (Conjuring Subterranean Vortex, Amor Fati Productions; a review on this one will (probably / hopefully) follow soon), yet on the untitled (or is it: self-called) debut by two-piece Hadopelagial.

The name is based on the deepest area(s) of the earthly oceans, the hadopelagic zone(s), which finds its origin in the Greek mythology, the underworld of Sir Hades himself. The project was formed somewhere in 2017 by composer / multi-instrumentalist Clemens ‘C.C.’ Coenen and vocalist / lyricist Patrick ‘Ghoul’ Hermann after they left Humanitas Error Est. They did record a handful of songs that were gathered as Hadopelagial, being released by Russia’s Satanath Records. Besides the digital edition, there are five-hundred physical copies, coming with a four-page booklet. No lyrics are included; just some basic information and a picture of both pretty boys. Anyway, everything was produced, mixed and mastered by C.C., who took care of the sober yet intriguing artwork as well.

As Hadopelagial, the duo brings a rather ‘traditional’ form of timeless, yet also somewhat modernistic Black Metal, being a very diversified and adventurous recording for sure. The better part is enormously harsh and intense. It blasts furiously, with avalanche-like drum patterns strengthening the ravaging energetic basics. Helios or Amunre are examples of such fury, where ‘taking no prisoners’ is the main rule. About those drums: quite a big deal consists of that frenzy rabidity. But for half of the time as well, the drums + percussions follow the ‘melodic’ twist of the whole package, with truly intriguing patterns and cadences. The whole also includes a hint of Post-like elegance, especially within the string section and the sound of the guitar leads. The ‘slower’ first excerpts of compositions like For The New Path (including hints of epic Pagan pride too) or Leviathan might give you a clue.

But the varying and adventurous character I mentioned goes quite far. Take the title track, for example, which is also the lengthiest piece (7:25) on this album (which clocks forty minutes). It opens with a grim and ominous guitar riff, slowly crawling closer, but soon it explodes in an all-devastating eruption. Nice to notice is the organic equilibrium in between blasphemous aggression at the one hand (I already referred to the unstoppable drum rhythm!) and a huge melodious approach on the other. The latter has to do with the tremolo leads especially. Then comes a short semi-acoustic intermezzo, before starting all over with that lightning fastness, reminiscent of the Swedish scene especially (Setherial, Dark Funeral, Marduk, you know, that kind of raging blast). After about 3:30, things decelerate (attention: without losing any power!), while the vocals turn rather ‘narrative’ in their poisonous blackness, but do not expect mercy, for more eruptional grandeur will follow once again towards the end!

The vocals too do vary, though they are mainly raw, wretched, presumptuous and lethiferous, as if eructated from the deepest corners of one’s belly, and disgorged with gastric (to remain in that belly’y story) acid and serpentine venom. Once in a while, the tone gets deeper, towards abyssal grunting levels, or dark-ceremonial preaching (as referred to in my description of the title elegy).

The production is extremely loud, yet well-balanced in mix. All tracks, all fragments (fast ones and even faster ones), the whole of the time the listener can experience a well-thought equilibrium of all instruments; none of them overpowering the others, none of them inferior to the others either. There is that necessary asperity in the production, giving the whole a certain necrotic and gross attitude. Even the short acoustic outro (called Dana) sounds ‘full’ and mature in sound (and performance, of course).

Hadopelagial will surely be hailed by (all) fans of, well, a huge and open-minded mindset for Gorgoroth, Setherial, Tsjuder, Taake, Enthroned, Anaal Nathrakh or Dark Funeral. Yet then again, do not expect just a ‘mixture’ of those combos, for Hadopelagial terrorise us with a sound and performance that is their own.