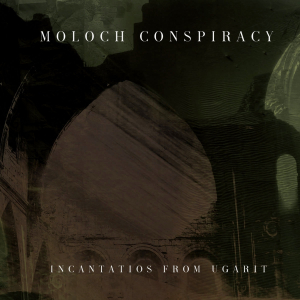 (same message as yesterday, for my Bonaventure-review) [due to health issues in my family, quite some reviews have been delayed; this one too is about an album for which the review had been prepared a while ago, yet it never got finished; now it will…]

The very kind human being Monsieur Julien Lacroix is the spiritual guide behind the magisterial project Moloch Conspiracy (he has some other projects going on as well, like some Japanese culture-inspired things, which I will come back to soon), always delving deep into the mysterious, mystic and ritual sides of Mother Terra + inhabitants, and its cults, ceremonies and tribalism. The project refers in its name to ancient divinities, one of the main themes as source of inspiration to this solo-project. This time however I will not dissect the core of this entity’s raison d’être; I’d rather like to refer to one of the former reviews I did for this project (links: see below).

Incantations From Ugarit deals with the Baal-worship, seen, or heard, from the torch-lit dungeons and jails in Ugarit. It’s an extremely old city, located in the West of Syria, and about 3,500 years ago (or more, or less, who knows). It was an important fortress in a period that the Egyptian and the Mesopotamian empires were growing fast and convincingly. There were some temples, and one of them was the shrine for Mister Baäl. Texts with a liturgic / religious / ceremonial nature from that period might refer to the Baal Cycle, and that’s the main source of inspiration for this newest work by Moloch Conspiracy.

Incantations From Ugarit has a total running time of almost fifty minutes, and it is inspired by texts and inscriptions from that ancient city. It was released by befriended label Eighth Tower Records, run by another very kind human being, Signore Raffaele Pezzella (aka Sonologyst). The album was printed on compact-disc (four-panel digipack, unfortunately sold out) and available as well via digital sources (link for the Bandcamp-page also at the bottom of this review). About everything was done by Julien, going for both the visual part (artwork) and the musical part (song-writing, production, mix, and performance of all instruments as well as samples, noises and digital manipulations). I am not sure whether he mastered the album himself (it might have been Raffaele too). Once again the album was done with vocal assistance of heavenly voice singer Uunslit (she worked with Julien several times before).

Those trusted with Lacroix’ most productive outfit will not be disappointed, for Incantations From Ugarit breathes the purity and creativity which this project is known for since centuries (I admit that ‘centuries’ might be an exaggeration, but I want to make a point, you see). The sonic side combines – and I admit that this is a very general description – ominous and haunting drones, a wide range of percussions and stuff, and different Field Recordings and samples, besides the subtle yet important use of different – sometimes quite unusual – instruments, such as wind-bells, cymbals, drums, piano, synths, chimes, cello, psaltery, flute, hand-pan, gusle, flute etc. All this gets channelled into another oppressive aural adventure under the banner of Droning Ritual Ambient, though this goes beyond the limitations of a musical genre once more.

The better part indeed is based on a foundation of deep-droning, gloomy and eerie soundscapes, creating a doomed, occult, often even ceremonial atmosphere. Monotone yet, at the same time, versatile layers of synth-waves sort of ‘carry’ the whole construction, like a figuratively sonic spine as centre of a noble orchestration. An example is opener The Cold Escape, with multiple oppressive, horrific and desolate synth-lines as basic structure, enriched by martial drum patterns and (church) bells, unknown percussion additions, creepy distant voices, eerie samples (do I also hear broken glass or tiles) and ghostly sounds from various sources. The keyboards do permanently grow, then again they seem to fade away before reappearing while covering the whole in a grim yet stunning mood. Contrasts do work obfuscating, even intoxicating. Visions Of Namtar is a perfect example, with that equilibrium of obscurifying (a neologism that does fit in here for sure) fragments and rather esoteric, almost ethereal excerpts.

That is somehow how Incantations From Ugarit seems to work, even-though the implicit variation is oceanic. The voice of Uunslit appears throughout the whole of the album, but she plays a leading role in a composition like the hypnotic piece Daughter Of Anu (with those mysterious flutes, disturbing strings + percussions, and ominous cello), or in The Familiar Weapons, with softly sung parts, fragile spoken words and subtle sighs and whispers. A couple of times, a male voice too is part of the whole concept (Legions To Legions or She Clambers Over), yet I think it’s sampled and not lively performed. Another important aspect is the refined injection of Middle-Eastern-alike fragments, materialized rarely yet, when appearing, of undeniable importance to colour the sphere. Take higher-mentioned The Familiar Weapons, for instance, carrying out the concept of the album. Also of huge importance (like about everything) are the multiple formats of percussion used, adding ambiances of martial pride (cf. the opening sequence of the album), of meditative and transcendental exaltation (The Head Of The Cauldron), of tribal and archaic identity, or just being ritualistic; frenzy and discordant too.