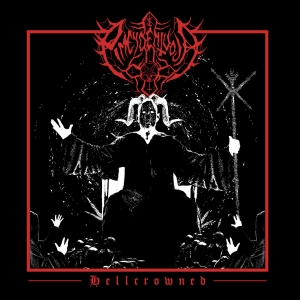 The moniker Pimeydentuoja reeks of Finnish stench, and indeed this is a band from the Land of a Thousand Lakes, and more specific from the Vaasa-region at the Bothnian Gulf. The band was formed at the very end of last decade, and in 2012 drummer Fördärv aka Krig V.A., bass player / guitarist Iva aka They Agony, and choirboy / lyricist Herr Razer aka Dödfödd came up with their first official demo, Black Goat Psalm. It took until half of 2015 before the trio released their first full length, The Devil’s Epoch, and now, finally, the ignorant audience can enjoy the sophomore soundtrack for rape and murder, blasphemy and misanthropy, sweetly called Hellcrowned. It was released on compact disc by the unholy trinity of Symbol Of Domination Productions, More Hate Productions and Black Plague Records in an edition of 500 copies, including a six-page booklet with the lyrics (in English). And there’s a tape-edition too, available via Dark Ritual, limited to 100 copies. The material was recorded at the Forsby-based Wolfthrone Studio, and the ten titles last for about half an hour. And the bass lines were performed by a session musician, Ulfurst, who is not part (anymore?) of the basic line-up.

Hellcrowned opens with a bizarre, haunting intro, To Death…, which sort of paints the right atmosphere of what this vicious album stands for. And indeed, as from the title track on, you’ll notice that this album smoothly continues the battle that once started with The Devil’s Epoch. The album brings violent, bestial Diabolic Death Metal with a blackened edge. It’s a raging, merciless experience, fierce and powerful, harsh and punishing. The main tempo is fast, with a couple of blasting explosions but once in a while everything slows down, like that majestic monument called The Malignant Heretic Prophecy. Cool too are the few samples, for example that Italian piece taken from one or another movie, I think, in the necrotic track Sadist Ritual (which is a track, by the way, that was written some years ago, and available on the band’s Bandcamp page as from late October 2016 – Ivan), or the evocative ritual that opens aforementioned The Malignant Heretic Prophecy. Anyway, Pimeydentuoja (which means ‘bringer of darkness’) is an extremely heavy album, with colossal drum patterns (damn, what an energy, what a power, what a masochistic pleasure to be hit by this sadistic ear torture), massive and vitriolic strings, and deep, guttural growls (+ a limited number of evil screams, evidently…). But what strikes me the most is the sound quality. In a way, it has the overwhelming heaviness of those lethal Swedish productions anno nineties, with that chainsaw-sound, that raw, rusty, sharp and unpolished Swedeath-sound.

Is it memorable, this album? No, it is not, seen the huge amount of releases lately. But believe me if I say that this album is a worthy successor of the band’s debut album, and that it has no fillers, just killers. This is a thirty-minute assault that will appease every adept of monumental Satanic Blackened War Death Metal!