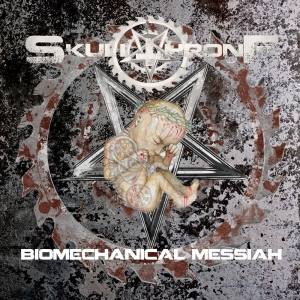 The Colombia-based quartet Skullthrone was formed five years ago, and recently they finished their debut album, called Biomechanical Messiah, which gets released by Satanath Records (Russia) and Morbid Skull Records (El Salvador), with distributional assistance of Metal Masala (India) and More Hate Productions (Russia). It lasts for just over half an hour and was recorded with following line-up: vocalist / guitar player Luciphago, drummer Goatlust, bassist Marius Alhazred, and guitarist Cerberus. In mean time they recruited a full time vocalist, Ivan ‘Demiurge’ Torres, but at the moment of these recording sessions, it was Luciphago taking care of that vocal aspect.

Biomechanical Messiah brings that kind of Extreme Metal I usually dislike, being too exaggerated, too (bio)mechanical, too fabricated. But… I do not know whether it is because this band isn’t from Polish soil especially (or European one more generally), but they seem to dwell within related yet slightly different dimensions of this specific form of hyper-tech Blast / Black / Death Metal.

First of all it’s the sound quality that surprises me. Lots of bands that try to be a Behemoth-clone come with a production that is clinically perfected, but in this band’s case there’s a subtle rawness, and undersigned is extremely pleased to experience this aspect. After all, the origins of these scenes are based on old schooled tradition, so what’s wrong with expressing the initial roughness of the sonic terror?

Secondly, I cannot dislike the timelessness of this band’s approach. Many bands try to sound as futuristic as possible, adding melodies, structures and diverse elements that trespass cosmic limitations. Sometimes it works, often it’s a turn-off. In Skullthrone’s case the lo-fi, even old styled execution is a surplus. It does not mean that this band goes back to the roots; at all! …for their influences are clearly rooted within the modern-technical aspects of the 21st century’s era. But since there’s room for quite some tradition, it gives another dimension.

A third great element is the song writing and performance: no bullshit, no gimmicks, yet based on a joy-of-play, and with an implicit well-balanced equilibrium in between the different players and aspects. It does not mean that this band brings something new or refreshing – because Skullthrone do not. But the simplicity, and the idea that all this gets performed so fluently and easily, well, it reeks of quite some conviction and professionalism.

Does this mean that this album is the best recording of the year? Well, no, that would be too exaggerated too. But seen the overload on comparable bands lately, I think these Colombians might show a difference within the current over-crowded scene.