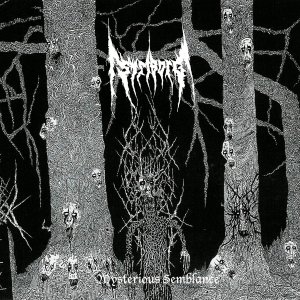 Two weeks ago, I posted a review on the re-release of the Striborg recording Spiritual Catharsis, originally released in 2004 and now re-issued by a partnership of Satanath Records and Death Portal Studio (see: http://www.concreteweb.be/reviews/striborg). So, I am not going to write a new full introduction on this Tasmanian one-man horde, but I’d like to refer to that recently published article.

Both labels took also care of another older Striborg album, Mysterious Semblance. It was initially released on tape via Sweden’s defunct Black Metal label Total Holocaust Records in 2004, and re-released a couple of times afterwards (e.g. via Displeased Records, cf. higher-mentioned Spiritual Catharsis, and Sin Nanna’s Finsternis Productions, which did the original release of that aforementioned full-length). This re-issue comes, like that other one, in so-called ‘vinyl-style’, with a sober twelve-page booklet and some song lyrics, in both English and Russian (!). Availability: 500 copies.

Those who know the stylistic approach of Striborg will know what I am talking about if I mention words like ‘Doom’, ‘Black’, ‘Ambient’ and ‘Space’. Reason: Striborg perform Ambient Space Doom Black Metal. Indeed, it’s that simple… Sin Nanna however created one of his masterpieces by means of Mysterious Semblance, I think. It is a very – and with ‘very’ I mean ‘very’! – bleak, cold and minimal form of Black Metal with an extremely grim atmosphere, a very slow performance, lots of injections from Dark Ambient (beautiful versus mesmerizing), and a frenzy ‘underground’ production. When talking about the latter, well, I am sure the sound quality will repel some. This stuff is totally under-produced, with a minimal mix and a rough, somewhat hollow sound and background noise. In all honesty I need to mention this. But at the other hand, that unpolished sound-approach sort of fits, for it strengthens the occult and mysterious atmosphere that covers this album. Most pisses, sorry, pieces are blackened, with extremely rough and buzzing, little melodic guitar lines, pounding bass lines far away, simplistic yet pushing and thundering drum patterns, and those incredibly strange and suffocating, sort of ‘hollow’ sounding blackened voices. This material is not of the renewing kind, but it does pay tribute to the essence of what purity must stand for within the underground scene. Some other tracks (or excerpts from the Black Metal compositions) stand for a hypnotic, mystic and transcendental, even ritual form of Dark Ambient Music. And then you have the sublime mixture of all those details and aspects: fast-paced and morbid passages, esoteric and levitating intermezzi, molochian injections, floaty and dreamy ambient passages and desolate soundscapes, doom-laden parts and mid-tempo excerpts, and so much more. The result is a coherent journey that permanently surprises, twists and challenges.

Anyway, in case you did not owe this piece of sh*t, I can surely recommend this creation of conceptual geniality. I did have the first compact disc edition, but this was an opportunity to go through this a couple of times again, and it reminded me of the joy I experienced each time when I listened to this stuff before. Black Aural Magic!