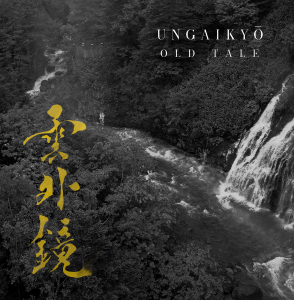 Julien Lacroix is the person behind the magisterial project Moloch Conspiracy, for which I did write several reviews in the (recent) past. This French guy is also active under several other monikers. Recently, for example, he did create and release a rather vampire-themed thing as Oupyr (probably I will write a review on this recording soon). But his interest in the Japanese culture created new possibilities and opportunities, for Julien wrote and recorded some Nippon-inspired stuff under different monikers, such as Goryō, Juuyokka or Yuugiri. Also Ungaikyō is an outfit that combines the experimentalist side of this artist with inspirational elements from the Japanese tradition. It is, purely informative, the name as well for a new label this guy started, focusing on projects related to this specific approach.

With Ungaikyō, Julien sort of wanted / wants to translate the core of Moloch Conspiracy’s raison d’être into the ancient Japanese universe. Therefor, the result is much darker than, for example, Juuyokka (even-though, and do not underestimate this, all his Japan-inspired projects do have a common approach in sound for sure!). Within this project, Julien works together with Chū Sen, a vocalist who has his roots within the Metal Music scene, and who practices a Buddhist Zen meditation technique. The latter seems to turn out a very important thing within the aural galaxy of Ungaikyō.

Old Tale consists of eight titles, clocking forty-seven minutes, and got released via the contemporary digital sources, as well as on compact disc (limited to 100 copies). The latter was realized in a partnership with New Mexico-based Noctivagant Collective, congregating in darkness, with beautiful black-and-white visual artwork, being pictures by stunning waterfalls. Almost metaphorically, it refers to the quest, the journey towards the top of the mountain, through visibly untrodden paths and haunted forests where ancient evil spirits might dwell. Being accompanied by a wise monk to help the protagonist, the main character strives to fight the inner demons in order to destroy this curse that weighs on my mind and to reach the monastery of wisdom and knowledge. …and self-realization, inner peace and awareness.

In extension of his other Japanese culture-oriented outfits, Julien’s Ungaikyō makes use of diverse, sort of characteristic, ancient / traditional instruments, such as the string instruments shamisen (a banjo-like three-string instrument) and koto (a kind of zither), or the shakuhachi, a kind of flute made from bamboo and traditionally used by Buddhist monks. Take the opening track, for example (which also is the title song). The ‘spine’ of it is like a dark, somewhat distant droning sound, soon ‘joined’ by different other aspects, like aforementioned strings and flutes, and a whole scala of percussions. It reveals a first step into the unknown, that first step that refers to the quest for wisdom, introspection and knowledge (as mentioned above). Yet it is as from the second ‘song’ on this album, Deep Forest (all titles, FYI, come in both English and Japanese), that the core of Ungaikyō’s aural being comes forth in its fullest, deepest essence. Starting off once more with an abyssal drone (and here the influence of Moloch Conspiracy is inevitable), the darker side of this outlet crawls near. Different synth-layers, subtle yet of undeniable importance, create a landscape obscure, mysterious and gloomy. The traditional instruments add a weird yet, at the same time, confident level of mystique and wonder, and the deep, meditative yet (also) haunting voices veil the whole into a sweetly caressing mist that blinds the path before you, yet which guides the wanderer as well into the unknown.

The whole Old Tale album carries that equilibrium in between the extremes of darkened and void-like atmospheres, based on the haunting voices and dim synth-lines at the one hand, and that elegantly injected traditional instrumentation at the other hand. The addition of several subtly-injected samples (rain and running water) and the vocal variety make the listener delve deeper into this sonic experience. When referring to the diversification of the voices, I am rather talking about the well-balanced use of deep-corded, almost throat-sung vocals, shamanistic rituals, whispering meditation, evocative chants and hypnotizing mumbles.

The physical copies are strictly limited, so do not hesitate to give this material a try. It will accompany you, as the monk does, though the abstruse canyon to reach the secret monastery at the top of the ancient mountain. Manifestation, divulgation and alleviation will be revealed…