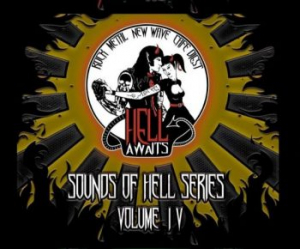 The compilation Sounds Of Hell Series Volume IV is, indeed, the fourth one in a series compiled by Sounds Of Hell, a young yet deeply dedicational label from Flemish soil (the ancient-historic city of Diest, more specifically, in case of interest). The series focuses on lesser known and not that unknown bands and projects from the Benelux area (i.e. Belgium, Holland and, who knows, Luxembourg too). They’re totally related to the Hell Awaits community, a place-to-be that organizes cool gigs, which offers cooled beers, and that gathers ‘fans’ of all kind of Rock, Metal and (New) Wave Music in general. …dedicated to good friends, good times, good memories...

In the meantime, the label did release a handful of interesting albums (not only from Belgian soil, like Ill, Demenzia Mortis or Dead Serious, but also from, for example, France – Psychisme – or Italy – H) (PS: some have been reviewed in the meantime; the others will surely follow soon). But let’s now focus on the fourth release in that compilation series. In extension of the former ones, I won’t go too deeply into the whole biography and discography of the bands and projects involved. Yet then again, a small word of introduction and a concise description of the track featured on this album will do just fine.

The compact-disc, by the way, once again comes with the very same cover artwork, yet with a slightly differing colour-palette once more, and with inclusion of an A5-sized booklet, which includes some additional information too. And purely informative, but seventeen out of eighteen bands are Belgian; only one does come from Holland.

…as said, a brief and concise word on each of the tracks featured; more detailed information will come in case of any review on an official release by any of aforementioned bands or projects. But this might give you an(other) idea of the distinctive and strong scene from the Lowlands.

Sounds Of Hell are working on the fifth compilation, as well as a sampler that trespasses the borders of The Netherlands and Belgium. Stay tuned and cheers, folks!