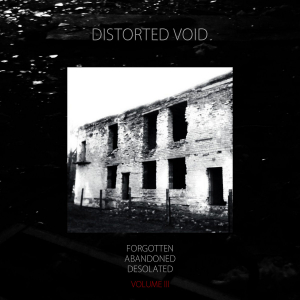 I know, a fourth one got compiled and released in the meantime, yet then again: so what? Indeed, this third compilation deserves all additional promotion and support too, just like the first and the second, and hopefully the fifth up till the 667th one!

First a very brief introduction. Distorted Void is an intriguing, strongly upcoming (Ambient) label from Russian soil, hosted by Evgeny Pustota of Psionic Asylum fame. This label houses quite some interesting, sometimes underestimated projects, and that’s why / when / where these compilations make sense. This review will deal with the third (annual) ‘forgotten, abandoned, desolated’ sampler in the so-called series, released more than one year ago, yet always worth being mentioned somehow.

Once again it consists of tracks recorded exclusively for this album (!); this time it gathers eleven artists involved with the scene – known and newer projects, notorious ones and projects that are climbing up, somehow, to heavenly dimensions.

-) Skadi – The Barren Road To Elysium (09:30) – this German project exists for, I don’t know, a decade or so, and it did record / release several intriguing things in the past. With their contribution on this third volume, Skadi bring a very oppressive and haunting piece with a permanently ongoing evolution in deepness and atmosphere; as if it climbs up, grows, expands the whole of the time. It starts rather integer, with icy and floating synth-lines, joined by somewhat ceremonial chants (with somehow a Gregorian attitude). Throughout this composition, the audible mist grows thicker and more impenetrable, with increasing synth-work and industrialized droning. There are so many levels, so many sonic lines subtly interwoven, resulting in a complex and heavy-weighted piece of pitch-black ambience.

-) Hoducoma – Shattered Fate (08:25) – I have to be honest: I did not know this project by Stanislav Lepa from the Russian Federation yet. I knew the name, but I do not think I had the pleasure to consciously listen to its material before. That doesn’t matter (for I will now delve into this project’s past). Many layers of synthesizer manipulation are canalised into a majestic and powerful, yet ultimately obscure and ominous result, continuously revealing new elements. Expect bizarre percussions, eerie waves of aural distortion, and field recording-like elements (like wind and water elements passing by). Here too, the atmosphere is dense and lightless, yet somehow beautiful as well.

-) Moloch Conspiracy – The Old Catacomb (05:11) – no introduction is needed, I think, for this stunning project by the great Monsieur Lacroix. This is the shortest track on this compilation, but seen the horrifying approach, it sounds as if it showcases a huge adventure thought nightly dimensions. A collage of found sounds and discordant noises, bells and chimes, strings and different percussions, and abstract strings and synths, The Old Catacomb works confusing and therefor attractive too at the very same time. It delves deep into the subconscious, entering primal spheres of anxiety, disturbance and wonder.

-) Kloob – Ignored Script (06:24) – this is a Spanish project by some Daniel, active within the electronic scene for two decades (and involved with the labels Winter-Light and Relaxed Machinery, by the way). His contribution too is a collection of eerie and floating keyboard-play, the deepened bass-drone-way, with additional noises, sounds and field recordings, once more resulting in some vast desolated landscape. It gives a cinematic feel, evoking mental visions of ancient secrets and forbidden knowledge. At the end, the effect of ‘fading away’ works hypnotic, by the way, even meditative.

-) Psionic Asylum – Shadows Of The Past (07:40) – ah, this project could not be absent of this third Forgotten, Abandoned, Desolated sampler, of course, for it is the main outfit of this label’s owner. This composition is a disturbing one, with that mixture of haunting soundwaves and rumbling drones, those harsher, mechanical sounds, the additional noises on the background, and above all, that frenzy Grand Piano work throughout the whole of the song. The latter, that piano, firstly appears as discordant addition, but as from almost half of the track, it brings a genuine melody, almost ‘happy’ and with a certain ‘retro’ aspect, accompanied by hand-clap-alike percussions, and weird semi-explosive sounds (like firework it sounds). Towards the end, the whole evolves into some gloomy experience, floating away into dimensions of abyssal emptiness.

-) Onasander – Encountering Kurtz (05:39) – this militant project by Italy-born Maurizio Landini is not a total stranger to Distorted Void anymore. Here Onasander appears with an extremely low-tuned, yet at the same time eclectic piece. Reverberating Noise as foundation, fed with industrial sound-collages and bleak, even lugubrious Ambiental soundscapes result in a hard-to-digest, and therefor addictive, experiment. Especially, as from the second half, when hidden portals of untrodden sonic spheres open…

-) Atmøsphäre -  Deserted Cities (07:24) – this must be one of the most dreamlike, mind-floating projects from Belgian soil (Tom Lievens); here too, the mixture of low-tuned basses, different additional samples and synth distortion end up in a discomfortable, subverted and perturbing journey though post-apocalyptic landscapes. A fine detail are the subtle elements, tickling and twisting in some deceiving manner, that return the whole of the time, disappearing again and again, and secretly reappearing once more. The dense main drone, by the way, that acts as basement for the whole of the track, sort of asphyxiates, like a static noise paralysing all brain activity.

-) Ektropos – Halls Of G’harne (12:23) – this mysterious act from Greek soil comes up with a very lengthy composition, one that narrates a dark tale of quest and revelation. Seen the long duration, one can expect a lot of things to happen. And indeed, Halls Of G’harne offers a lot of intriguing and adventurous things. Yet despite a certain diversity in sonic details, the whole remains surprisingly organic. Rumbling and thunderous drones interact with floating waves of mystic Ambient; industrial aspects go hand in hand with the injection of sampled sounds; abyssal waves of dim ethos mingle almost passionately with minimal structures and primordial constructions.

-) Sysselmann – The Abandoned (06:08) – from Norway comes this outfit, influenced by eternal lightless and cold. This track starts integer and minimalistic, with a ‘melody’ coming up and fading away over and over again.  With well-thought subtlety, Sysselmann add other details, step by step, having this piece grown slowly yet convincingly. Yet it is as from about half of the ‘song’ that a whole new world gets revealed, like a curtain being torn away to show a bleak, forgotten wideness. It’s like levitating waves of sound at first, and eventually harsher fragments, pouring down like freezing raindrops. The Abandoned showcases asphyxiation and hypnosis for sure.

-) eumourner – In A Wormy Mass (07:30) – not a solo-outfit, but a collaboration (in case of interest); from Italy, by the way. With this piece, eumourner display an overwhelming, smouldering amalgam of noises from so many angles: noises and samples from various sources, experiments with voices and keyboards, strings and percussions, and so on. Mind the martial drum patterns that appear and reappear a couple of times; or the orbital keyboards fragments, taking the listener to universes undiscovered; the devastating and monumental drones flooding over any last trace of tranquillity or integrity; the screeching electronics, and so on. In A Wormy Mass is one of the most overwhelming, bombastic aural experiments by these Italians, I think.

-) Sílení – Light Is Gone (05:12) – hailing from Portugal, Sílení indeed stands for tropically-heat beaches and Mediterranean pleasures… Not! (they are not Mediterranean, haha)... This piece starts with a down-tuned and droning melody, added by different samples (sirens, voices, wind, waves, traffic sounds etc.). soon it evolves into a melancholic, dreamlike symphony, with magisterial keyboards and these additional samples; even-though the latter fade away. The final sequence focuses on introversion and calmness, and you know that all light has definitively gone…

It is such immense pleasure to notice that this compilation is a mostly cohesive thing. I mean, all compositions on Forgotten, Abandoned, Desolated Volume III have a mutually-elaborated core, as if all of it was composed by one sole mastermind. Of course the connoisseur will notice the distinctive projects involved, but one cannot ignore the coherence. Seen the fact that all projects involved had their compositions created for this release exceptionally, this shows insight from all artists involved; the guy behind this compilation series included. More to come, I hope!