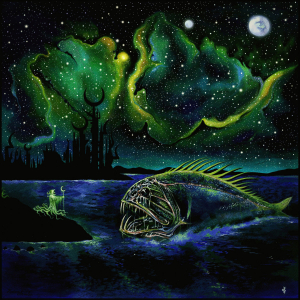 One of the most, eh, how will I put it, eh, let’s call it a ‘weird’ label… So, here it comes: Fish Prints is a weird label (haha, I did it, safely), dedicated to ‘curious sounds, past and present’, with releases by some truly unusual artists. No, seriously, when talking about an open-minded approach, this label by Thor Maillet houses Music(k) from so many angles, yet with one thing in common: not for the grey masses! Every single release (amongst them also Thor’s outfit Petridisch, for which I will soon write and publish at least one review too – surprise, surprise) is meant to please a limited public, yet then again, it’s a pleasure to have such labels around, for those ‘exceptional’ recordings somehow deserve a (professional) label to support / promote those artists.

Anyway, Fish Prints did / does release some recordings from the extremely productive act Cryostasium, among which a couple of previously released stuff too – indeed, re-releases, if you really want to put a name on it. One of these re-releases is Starbound, a mini-album that initially was offered to the worldwide audience in October 2017 via a collaboration of Metropolitan State Productions and GrimmDistribution. The latter, by the way, is run by a mostly sympathetic label-owner and musician, i.e. Aleksey Korolyev. Aleksey has several projects (and labels), and with one of those projects he’s in, Abigorum, he once did a split with Cryostasium; so there is more than just one accidental connection in between both of them.

Another link that involves the Cryostasium outfit is the relationship to Fish Prints. That’s because the guy behind the label, Thor, and the guy behind Cryostasium, Cody, are twin brothers. Besides, they did work as ‘musicians’ together before as well under, for instance, the CTM moniker.

…but now I will focus on this re-release, for all information above is of no importance, unless you really have nothing else to do but to read, and re-read, my ingeniously collected knowledge. So, Starbound was originally released about three years (and some additional days) before this re-release. It was written by Cody Maillet and recorded during Spring 2017at the grandiose (who knows?) K2 studio in the guy’s home state Massachusetts. The artwork, which I do like a lot (for what it’s worth), was created by Luciana Nedelea, who actually worked with some bands or projects on Aleksey’s (see above) labels too (like Abigorum or Trond). The whole thing got remastered in August 2020 by Z. Emerson, and the physical re-release editions are quite limited. There’s a hand-numbered CR-r with rear reversible cover + full colour tray card (only a few copies are left), as well as an even more strictly limited mini-disc (hand-numbered and -stickered) - and of course you might hunt for the digital edition or the original edition on compact disc, via GrimmDistribution.

What comes next, will not be based on the review I initially wrote for the original edition in 2017. I am not too lazy to reinvent everything myself right now (haha), so I will get ‘inspired’ by my current thoughts - and not those from three years ago - in a fairly balanced mindset of this very moment, when enjoying this stuff for a 69th time (a 666th time would be an exaggeration, to be honest).

Like about all things recorded and released under the Cryostasium banner, Starbound too stands for an ugly, filthy form of blackened Metal. You like it, or you do not. It’s grim and very lo-fi, both in execution as in sound quality. But hey, this surely fits to the general atmosphere; the latter being distinctive, malignant, torturous. And I’ve never heard someone complaining about the sound production of, let’s say, early Striborg or Ildjarn either, so why would repine you anyway…

The basement is created around mesmerizing guitar melodies, somehow bewitching and dreamlike (nightmares are dreams too, as you know). For sure there is a psychedelic twist, a psylocybe experience, yet still that melodious aspect is deeply adorable and attractive. But there is much more. The whole rhythm section (bass and rhythm guitars + drums) is highly supportive – the bass lines, for example, are truly uplifting this sonic adventure, while the drum patterns (I do, to be honest, not know whether it’s a drum computer programming, or live played drum work; I think it’s the latter). The tempo, which might be of interest, varies from quite doomy over mid-tempo to pretty fast, with everything in between. That too is a great thing, to strengthen the attraction (or to demolish any chance of boredom).

But there are a couple of additional interesting things too. The vocals, for example, come from two different sources. You have the ‘blackish’ screams, which are ultimately raspy and raw, wretched and molested. But a big deal of the ‘vocals’ are courtesy of mademoiselle Meiko. But she’s a vocaloid program, and not some pretty East Asian female, a technology which has been used by both Cody and Thor before. Unusual, yet it does fit. Also the (limited) use of (church / wind) bells (chimes?) and some synths give that additional dimension to the whole experience.

Oh yes, besides Petridisch, a review on the re-issue of The Possessor will come this way too…