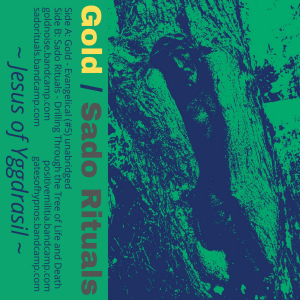 Are you ready to praise the messiah and his holy father? Will you spread his word and hail his virgin mother? Are you prepared to meet Jesus of Yggdrasil?

Well, then this soundtrack might be your guide into the mental / mentally disordered dimension of sacrificial pleasure…

A word of introduction. This split-release was composed by two sympathetic sonic sculptors from European soil that did, and do, work together for quite some time: D¥$FUNCTion and Sadox. This is their first mutual release, as split, for their solo-outfits Gold and Sado Rituals respectively, clocking exactly one hour. This effort gets released digitally via Gates Of Hypnos from Poland, run by Sadox, and it will be pressed and distributed as well on cassette soon through Mister D¥$FUNCTion’s Positive Militia (UK). And before analyzing the aural content, first a word about the artwork. It was Sadox himself who experimented for the first time to create cover artwork for tape-format, and I guess he did a great job. It isn’t but a personal opinion, but I do adore the color-palette, being black and dark-green, which sort of reveals a sense of obscurity, mystery and wonder. More mystique and astonishment get evoked by the original picture behind this manipulated result; look closely and you’ll find out the details of this remarkable combination of nature and religion.

The stunning thing is that the unforeseen and hidden message behind this cover artwork deeply fits to the two elegies on Jesus Of Yggdrasil. The ‘Music’ (muSICK it is) too has that permanent conflict in between devotion and decadence, in between the search for the Inner Eye at the one hand, and the urge to bang and to burst out. Both compositions do explore these contrasts with passion and creativity.

The first ‘song’ is called Evangelical (#5) Unabridged, created by Gold. It is an outfit by a guy from Leeds, U.K., who runs some smaller yet quite impressive labels (like Xivu Arath Productions or Abstract Trauma Recordings, as well as Positive Militia, which is involved with this specific release). He’s active under other monikers as well, like Carrion, Star Damage, Aspects & Fragments, Mythmaster, and who knows what else…

Anyway, Evangelical (#5) Unabridged has a total running time of exactly thirty minutes. It goes on in the vein of (some of) the former material, which means that vocal samples and field recorded material are like the backbone of the whole creation. It starts with a rather hysterical preacher initially, yet soon the prophetic messages towards some people’s ‘superstar’ get accompanied by rough, noisy textures. These static noises do rumble and crackle, covering the spoken samplings in a misty, almost asphyxiating veil of both calamity and solace, illumination. Of course, the texts from those recorded voices are comparable. Some other additions, secretly hidden yet well-thought, lift the whole up to intoxicating dimensions, like these weird, ominous, almost demonical voices as from twelve minutes, and, of course, these sexual sounds of pre-orgasmic pleasure and masochistic complacence (not unusual for this project, as you might know). The final quarter of this track climbs up towards a climax (I am not just talking about the fleshly consumption of two people’s bodies, hehe), but some irony (drunken confessions and mass laughter included) and the increasing presence of consistent harsh noises create an eruptional effect for sure. …all in the name of Jesus…

The second musical ode to the mighty one is called Drilling Through The Tree Of Life And Death (also clocking exactly half an hour), created by Sadox, who runs Gates Of Hypnos (one of the biggest surprises as label within the Experimental / Noise / Drone / … scene since I discovered them last year). You might also know this human being from the duo Crepuscular Rituals, by the way. After several months of personal problems and health issues, I am so glad he’s back amongst the living!

This second piece on Jesus Of Yggdrasil is a monumental piece of Harsh Noise with a huge range of layers and levels. Drilling Through The Tree Of Life And Death is a wall of sound, deep-tuned, wretched, toxic, and smoothly injected by an overload of additional tunes and sounds. It has a vibrating repetition, which goes well with the suffocating atmosphere, for it strengthens the supernatural message. Hint of spirituality and even meditation - believe it or not – penetrate the morbid and mechanical drones. It’s like illusionary low-tuned basses, continuously fluctuating and reversing, permanently expanding despite the repetitive waves of sound-texture. The colossal, monolithic rumbles are like an avalanche, a whirlwind, which one cannot escape from, yet which no one will evade from either, for the covering of this aural tsunami works masochistically soothing.