My Death Belongs To You 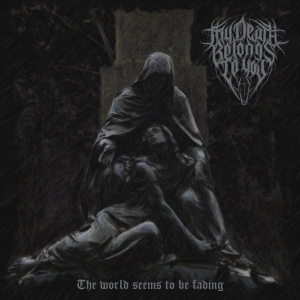 One of the most creative and productive musicians / producers from Switzerland must be Sergio Da Silva aka B aka Bornyhake Ormenos aka Moplat aka S.Rottenvomit (as studio wizard, not as instrumentalist) as, well, whatever, who’s known from the Swiss Chaos Studio, known as the owner of labels like Azif Records and Rotten Vomit Records, and known for being active in uncountable bands and projects such as Kawir, Borgne, Ancient Moon, Enoid, Decomposition, Gerbophilia, Pure, and many more. But he seems to be the guy behind My Death Belongs To You as well.

This solo-project was formed a while ago – in 2013, if my information is correct – but I do not have the impression that this outfit is an active one. Throughout a period of six / seven years, several tracks were written, yet never officially released – until now! A collection of five hymns has now been gathered under the banner of The World Seems To Be Fading, all of them recorded, evidently, in this guy’s Chaos Studio (recording, mix and mastering). Besides the digital one, there is a jewel-case compact disc edition too. That physical release is limited to 500 copies, and it comes with an eight-page booklet. That booklet has sober yet beautiful cover artwork (which absolutely shows a clear – or is it obscure – glimpse of the sonic approach!), which is done by some Ekahyn Rob; besides, it does contain the lyrics (especially in English, yet with one track in French as well), and the layout (with sober, black-and-white cemetery pictures) is courtesy of Jane Orpheus. The latter is also the young lady behind Funere, an Armenia-based Doom label with a modest and small, yet truly excellent (!) roster. Some more reviews on releases via Funere will follow soon (and so are some more Bornyhake involved recordings, by the way). Funere is also the label that takes care of the debut album under My Death Belongs To You’s moniker.

As a soundtrack to explore your darkest, most intolerable and bleakest thoughts, The World Seems To Be Fading will guide the listener through dimensions where natural light, fresh air and prolific basics are spurious elements. Instead, bleak moods, funereal atmospheres and ominous thoughts take over the conceptual foundation. An ambience so impervious and uncanny blackens the concept veiled under this introspective representation of Bornyhake.

More specific, these lengthy compositions are a mixture of both typifying and characteristic elements. Of course, the tempo is slow, very slow, extremely slow. The drums slowly crawl forward, monumental in execution, thunderous in strength, yet almost uncomfortable because of the doomed power behind that whole percussion aspect. When talking about the string section, the listener will experience a grandiose equilibrium in between massive, grievous and scorching rhythms at the one hand, and dazing, even anaesthetizing melodies at the other hand. On top of it, the vocal contribution intensifies the gravity. The main voices are of the ultra-deep, growling kind. A bestial, gurgling throat acts like a story-telling channel, but those stories do not deal with fairylike or catchy tales. Bornyhake’s main vocals are so deep and pernicious; maybe some of the most suffocating and malefic ones done in quite some time. But some cleaner chants, whispers and spoken words too are part of the quest. And that permanent injection of subtle, yet sublime, details, is nothing but a great thing.

But there’s more. Some floating guitar solos, the egregious yet dismal (classic) piano intermezzi, or the many lackadaisical synth fragments, create that additional desolate attitude, that gruesome atmosphere that gives this whole funereal adventure a monolithic touch of dejection, anguish and dolour, yet also vindictiveness and revulsion in some way. A hymn / lament / elegy / whatever, like Your Dark Embrace is the perfect example to explain, to define this cohesion in between ambivalent emotions and manifest inclination.

Open-minded ‘fans’ of everything in between (early) Abstract Spirit, Evoken, Skepticism, Woods Of Belial, Urna, Shape Of Despair, Trails Of Sorrow or Unholy – and probably some Ancient Moon – I won’t finish this phrase; you know what I am referring to. No fun, no hope, no forgiveness, no grace; just enter the murkiest corners of the consciousness, and float away through, well, whatever. The World Seems To Be Fading is a colossal epos that might attract and captivate the sombre-hearted, the dark-spirited, and the woeful-minded amongst us.